With round one in the books, here is the first match-up of round two!

If you aren't sure exactly what this is, you should check out one of the last two episodes of the JetStream Podcast.  But for those of you in the know, I'm happy to introduce the second round of the 'Winnipeg Jets Worst Case Scenario' showdown! 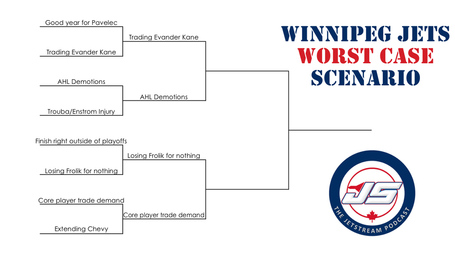 Our first match-up in round two of the bracket finds us asking you which of the following would be worse for the Jets:

Brief introductions to each side of the debate were made in Episode 39 of the JetStream Podcast, but here's a quick reminder of some of the points (both positive and negative) that the guys made:

So what is it Jets fans? Would trading Evander Kane, or AHL demotion worthy seasons from Mark Scheifele and Jacob Trouba be worse for the Jets?

We want to hear from you. New for this round, send in audio or a video of you making your case to jetstreampodcast(at)gmail(dot)com and you could be featured on the next episode of the podcast! You can also tweet your vote at us using #JetStream, or vote in the poll below and leave your explanation in the comments!