If you have no clue what this is, you should probably check out the latest episode of the JetStream Podcast first.  For those of you in know though, here is match-up number two of the "Winnipeg Jets Worst Case Scenario" showdown! 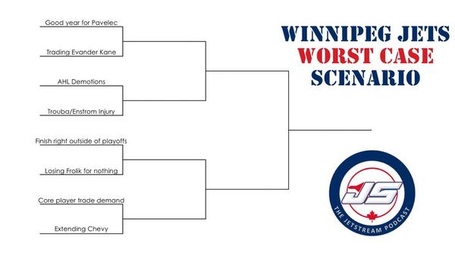 Yesterday we saw 'Trading Evander Kane' take a huge lead over a 'Good Year for Pavelec', and today we ask you what would be worse:

A serious injury to one of Tobias Enstrom or Jacob Trouba

Brief introductions to each side of the debate were made during this week's episode of JetStream, but here's a quick reminder of some of the points made (both positive and negative) for each side:

Serious Injury to Trouba or Enstrom

Which is it Jets fans? Would AHL-worthy seasons from Scheifele and Trouba, or a serious injury to either Trouba or Enstrom be worse for the Jets? Be sure to vote in the poll below, tweet at us using #JetStream, and state your case for which you think would be worse!