Kevin Cheveldayoff makes up for Chris Thorburn in a big way.

The Winnipeg Jets sign former Anaheim Duck, Mathieu Perreault, for three seasons at three million AAV. So, what do the numbers say about Perreault?

Perreault is also an above average centre in the faceoff. Faceoffs are overrated by the media and fans often, but still are a part of the game in improving a team's chance to win. Perreault has also been a solid player in drawing more penalties than he takes, something the Jets could use a lot more of. 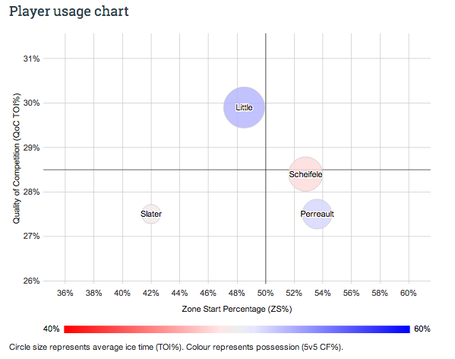 Over the last three seasons Perreault has been used predominately as a sheltered scorer, similarly to Jets' own Mark Scheifele. It will be interesting to see how Maurice deals with it. My guess is it will depend on the wingers with Scheifele and Perreault for who gets a tougher line matches, although both will likely get pushed into the offensive zone. Don't be surprised if this need for sheltering ends up hurting the Ladd-Little-Frolik line with taking more toughs.

Perreault also adds value on the power play, with being about league average for power play points per minute. 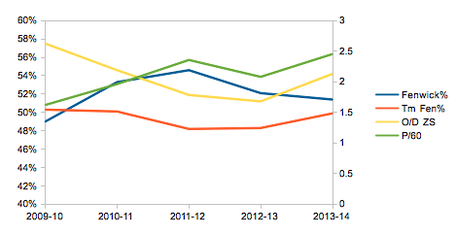 The numbers indicate that Perreault has done a good job, even with respect to the softer minutes he's been given. Two out of the past three years he's improved his team's puck possession by a higher percentage than the offensive zone start push he's been given.

There is some some worries that there is a trend downward. @MimicoHero was kind enough to donate Perreault's Z-Score chart:

When it comes to scoring goals, assists, or points, suppression shots against, increasing shot production, or improving possession, Mathieu Perreault scores above league average in all categories. The trend in the shot metrics has been downward over the last three seasons, although his point scoring has been trending upwards.

Perreault has been an elite 5v5 scorer. At 2.34 points per 60 minutes is the 18th highest point scorer with 1000+ mins between 2011-14. The three above are Brad Marchand, James Neal and Max Pacioretty. The three below are Patrick Sharp, Patrick Kane and Patrice Bergeron.

This scoring production places Perreault far above any of the Winnipeg Jets in point production: 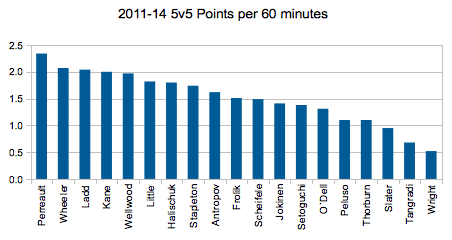 Earlier when discussing free agency and looking at some possible "moneypuck" pickups available we showed you this: 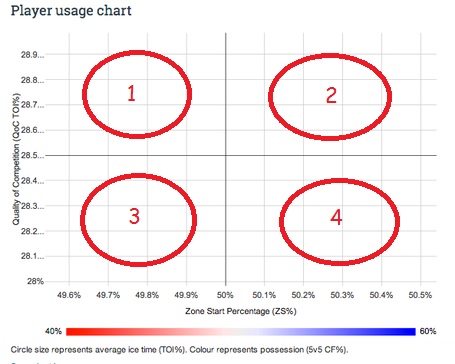 We already know that Andrew Ladd, Bryan Little and Michael Frolik are going to be playing in quadrant one, taking the team's toughest minutes. So where do the rest fall?

*Dustin Byfuglien is a +possession player historically as a defenseman only

Already the Jets look poised to create offense at strong levels. When Mark Scheifele is you worst point producing forward per a minute, you know you are doing pretty good. Still, Jets are looking for one more top nine player. These type of players are the guys you want to start in the offensive zone as often as possible.

There is, however, a bit of a gap in players who promote possession at a solid level, especially since -as we've already discussed- even Perreault needs some sheltering to improve possession. Hopefully the Kevin Cheveldayoff picks up one more top 9 player, with emphasis on possession over scoring, even if it is a tradeoff for less scoring. The Jets' optimized middle 6 line up will likely depend on who the Jets sign as that additional player.

Cheveldayoff said he would still like to add another top six calibre player. By my estimate, and if the 65 million reported internal cap is true, the Jets have five million left in budget to improve their team. That's with Eric O`Dell and Michael Hutchinson taking simply the Jets qualifying offer, no more.

There are not too many players who both score and promote possession while fitting Chevy's MO of fast and smart left in the UFA pool.

The best players available in UFA (in alpha order):