Evaluating Defensemen using their effect on both team and opponent Corsi%

There is more than one way up the mountain when it comes to player evaluations.

Share All sharing options for: Evaluating Defensemen using their effect on both team and opponent Corsi%

Tyler Dellow has recently pushed for defensemen evaluations via their effect on their team's Corsi%, also known as relCorsi. Over at Hockey-Graphs, I published today that there is another angle to look at as well: how a defenseman affects their opponents Corsi%.

The article is worth a look and some discussion. The punchline though is in this graph here: 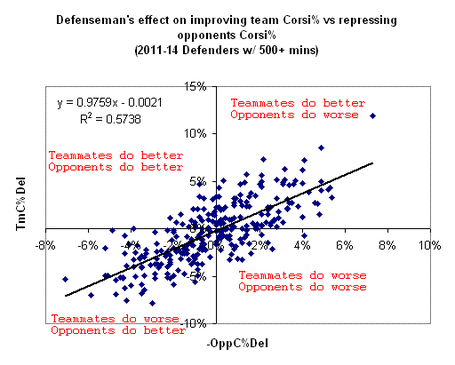 For fun, I thought we'd like to look at how different Jets defenders fared in these different metrics.

Jets defensemen with 500+ 5v5 minutes accrued on team and signed for next season.

* There is an obvious link but  some differences exist.

* Tobias Enstrom is really good at hockey. I don't care what anyone says about his size. They are misguided.

* The Jets will likely miss Byfuglien on defense, although if Trouba can be freed of his anchor, maybe we can start to see an awesome Enstrom-Trouba pair.

* Both Trouba and Bogosian seem to hurt their team's Corsi% more so than than they help their opponent. This discrepency is likely due to their defensive heavy deployment.

* Clitsome has the most extreme opposite effect, meaning his relCorsi may be overstating his effectiveness.