After one and a half seasons as the St. John's IceCaps best player, and one of the top players in the AHL, Eric O`Dell was finally given a chance to make his name in the NHL.

Under Calude Noel, Eric O`Dell was played primarily as a fourth line forward. Under Paul Maurice O`Dell was given some of the cushiest ice time on the team. Giving an offensive prospect some favorable zone starts lessons the load as the player transitions to the NHL game. As the season progressed - and Maurice liked what he saw - O`Dell was given better line mates, more even strength ice and even a little bit of powerplay time. 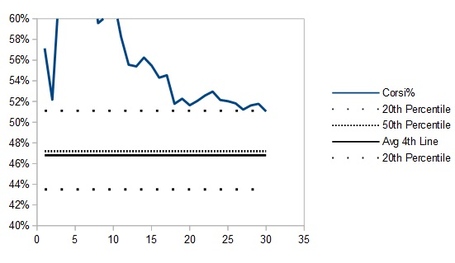 O`Dell pushed out positive Corsi numbers, which should be expected given his deployment. It will be interesting to watch his numbers and deployment change over a larger sample size. O`Dell's sample size was too low for dCorsi%.

Eric O`Dell played a limited role for the Jets, but never looked out of place. He did this despite playing with known Corsi black hole Matt Halischuk nearly a third of the time. O`Dell could stand to add some burst to his first couple strides, but his two-way hockey smarts were beyond evident. Still, more sample is required to make any firm assessments.

At this point O`Dell has little else to prove at the AHL level. He will also be waiver eligible next year. This, coupled with the fact that he held his own in the NHL suggests we will see Eric back with the Jets on a full time basis next year.

O`Dell is easy to root for. His story is one of hard work and perseverance. Read it here if you aren't acquainted and his on ice battle level is always evident as he shows a willingness to take a beating to made a play. Also, ICYMI he earned himself perhaps the best URL anywhere on AIH via TJ.  http://www.arcticicehockey.com/2014/1/14/5306740/winnipeg-jets-eric-odell-awesome