We have arrived at the individual player performances section of the series. We will move from back to front, starting with goaltenders and ending with forwards with each in alphabetical order of surname.

After only playing 7 games (in which he started only 5), Arctic Ice Hockey thought it unfair to judge Al Montoya's performance last season.  With an additional 28 games though, we can now start to evaluate his performance while wearing the polar night blue.

All numbers are from extraskater.com and rankings are out of 59 goaltenders who saw at least 25% of their team's games (ie: 21+ games played).

Montoya was the starter for the Jets in 22 games. The netminder finished the season with a very impressive (and likely unsustainable) 0.920 save percentage, which placed him in the top 20 for goaltenders with 21 or more games played. 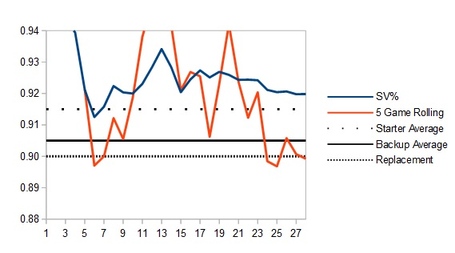 Montoya performed more than admirably this season. His five game average performance dipped under replacement level only 17% of the time and was above starter level 54% of the time.

Montoya's performance was not from being sheltered either. Of Montoya's 24 starts, 62.5% were against playoff teams. Interestingly, Montoya was also leaned on heavily against the Jets toughest divisional opponents; starting 2/4 of Jets games against Chicago Blackhawks (and playing in 3 of them), as well as 2/4 against St Louis Blues, and 4/4 for Colorado Avalanche.

Montoya's performance as a Jet 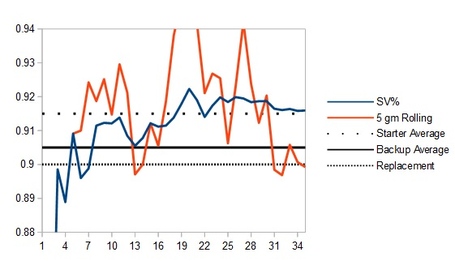 The data-set is not extended substantially by adding in the season prior, although we do see some regression to levels more likely towards Al Montoya's "true talent".

Al Montoya has played well as a Jet, and with a combined seasons record of 16-9-3 the Jets have performed well with Montoya. His performance exceeds his usage as a backup and exceeds his paygrade. Montoya's save percentage of 0.920 this season is likely unsustainable, as that level of sustained performance is reserved for perennial All-Star nominees, but still a praiseworthy accomplishment.

Whether the Jets should keep or lose Montoya is partially dependent on what they do with their starter and their plans with Michael Hutchinson. If they plan to keep Pavelec and test the NHL waters with Hutchinson, obviously Montoya is lost in the numbers game. However, the Jets could do far worse than having Al Montoya as part of a platoon 1A-1B type situation. A platoon with a graduating prospect (example: Michael Hutchinson), a free agent aquisition (example: Thomas Greiss) or a trade acquisition (example: James Reimer) would likely end with superior goaltending results than the Jets have seen previously. 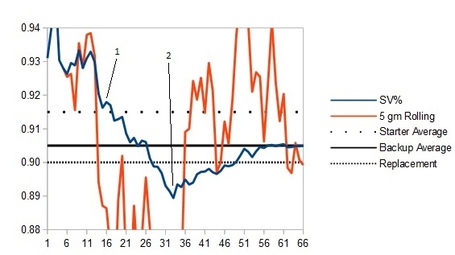 By further increasing the sample size, we get a better understanding of Montoya's most likely true talent level. This places him around the level of Ondrej Pavelec.

However, there is one little pattern that should be noticeable. In the 2011-12 season Al Montoya suffered a severe concussion when Evander Kane ran him over (marked as 1 on above chart).

We can clip out the time between Montoya's concussion until the offseason where he was able to recover (marked as 2 on above chart): 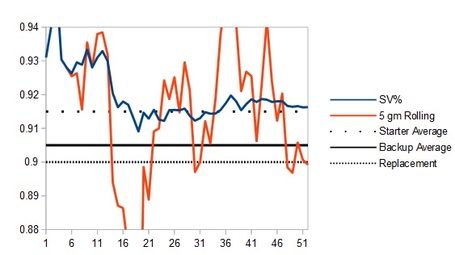 The removal of Montoya's post-concussion section creates an oddly stable line right at average starter save percentage. Is Montoya truly an average starter calibre goaltender? Or is he at average backup level? Or is he somewhere in the middle? In my opinion, the most likely answer is the last one.