We take a look at the Winnipeg Jets best players in special teams situations, starting with forwards when on a man-disadvantage.

Let's be honest; special teams has been a bit of a problem for the Winnipeg Jets 2.0. While this is probably the only situation I will give some validation to the move and no training camp, there is still something we can learn with who has been more and less successful under the team's new systems.

We'll look at how the Jets performed over the last two seasons combined in four versus five situations:

* Alexander Burmistrov places 13th best in NHL for CA/20, with Andrew Ladd at 18 and Bryan Little at 19

Many have stated that Michael Frolik should amply replace Alexander Burmistrov's penalty kill production, although the numbers seem to indicate that this may not indeed occur. While Frolik did have a limited amount of shots against, it is more likely the next season that his shots against is more representative relative to where his Corsi attempts against fell. It is not shown here, but the numbers do however show Frolik as a valid replacement for Burmistrov in 5v5 situations.

A common meme last season was the Jets were better off on the penalty kill than on power play situations. While this is not even remotely true, the Winnipeg Jets do house a few players who are able to create impressive offensive opportunities when on the ice. This is true for all of Evander Kane, Alexander Burmistrov, Andrew Ladd and Bryan Little. In fact, for all 50+ min players penalty killers, the Jets directed more pucks at the oppositions net with Kane on the ice than any other player accomplished in the entire NHL. Also, looking at penalty kill regulars over the last three seasons (300+ min players over 2010-13), Travis Yost showed the best players in the NHL at generating offensive chances: 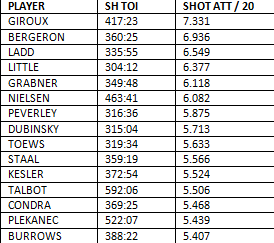 Jim Slater was not at all even remotely good in 4v5 situations, and he lead the team in minutes. Claude Noel decreased the minutes given to Slater last season; however, with Alexander Burmistrov gone to the KHL, this may unfortunately revert back... and we may end up missing our special Kane-Burmistrov duet.