We take a look at how some #NoeLogic choices likely hurt the Jets chances into getting into the playoffs.

Share All sharing options for: Coach Claude Noel may have cost the Winnipeg Jets a playoff spot in 2013

Hypotheticals can be fun. They are even more fun when you can base them on evidence and facts. The Winnipeg Jets missed the playoffs again last season, continuing the franchise drought, and that is a fact. Another fact is that some members of an organization have more responsibility for the loses than others. While hockey is indeed a team game, I don't believe that every single player and member of management on a below average team are in fact below average. To me, the individuals with the largest negative impact are those that are most responsible. So, how much responsibility should fall on coach Claude Noel?

Is there evidence that the Jets were poorly coached?

It is difficult usually to judge coaches statistically, as players are not robots; they change fluidly game-to-game and seasonal rosters are also dynamic.

The truth may be hard to believe, but the Jets headed into 2012-13 season with a much improved roster than the previous season, thanks to some savvy off-season moves by Kevin Cheveldayoff. Olli Jokinen, even with his poor luck, was an upgrade over Tim Stapleton and pushed Alexander Burmistrov into a 3rd line role. With Burmistrov on the 3rd line, it should have become a strong possession line, increased the team's overall depth, and at the same time put Burmistrov in a position to earn his way back into the top-6. Alexei Ponikarovsky was also an upgrade over the even-strength-looking-like-a-penalty-kill specialist Tanner Glass. The domino effect also pushed the Jets' weaker players like Chris Thorburn and Jim Slater into much lesser roles. 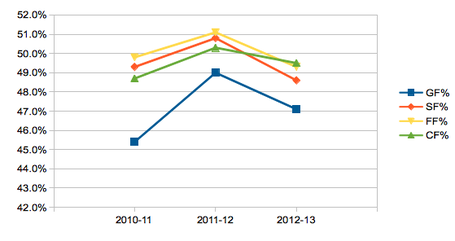 We can also look at the Jets' Fenwick Close - a team's percentage of unblocked shot attempts when the came is close (i.e. within 2 goals) - throughout the season to see that the team experienced a downtrend throughout the season. Gus Katsaros from McKeen's Hockey showed this visually here: 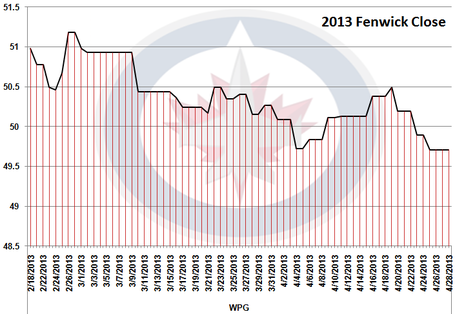 The Jets were a positive shot-differential team for much of the season, but got noticeably worse as the season went on, eventually landing in the negatives.

What part did Claude Noel play?

I am not a specialist in team systems, so I can't praise or damn him in this area, but I suspect a serious case of #NoeLogic, which is a term occasionally used at Arctic Ice Hockey to describe the decisions made by Jets' coach Claude Noel that seemed contrary to what odds dictate is likely the best strategic option.

Noel's penchant to overwork Ondrej Pavelec is almost too easy of an example, especially Noel's doling out Pavelec starts even in back-to-back game situations.

This is not meant to be a mark against Pavelec; even the best goalies tend to perform worse on average on the second of back-to-back games and Ondrej Pavelec is no exception to this. His career numbers without rest are below that of a replacement level goaltender's save percentage and, more importantly, below Al Montoya's average everyday performance. The numbers dictate that on the second half of back-to-back games, the best decision would have been to play Montoya on one game in such situations.  Montoya would most likely perform similar to his career average, and then give the other game to Pavelec. This would optimize the Jet's goaltender's influence on the games. Instead, #NoeLogic often dictated that Noel send Pavelec into the trenches for both back-to-back games. 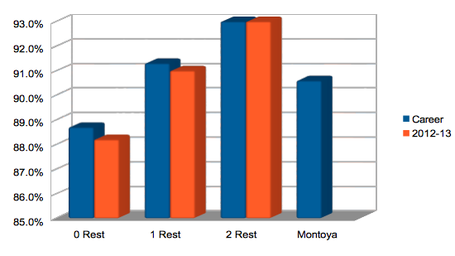 Lo-and-behold, history repeated itself.  Ondrej Pavelec performed similarly to what would have been hypothesized. This may sound familiar to AIH regulars, as Daniel Lipson has already discussed this previously. He was also able to use historical performances to estimate that the likely difference this decision made on the Jets' goal differential was about 7-10 goals. In this past shortened season, 10 goals is a big difference.

Another easy target is the allocation of ice time given to the Jets forward group.

The Jets' team Fenwick Close fell hard this season in spite of a stronger roster. The top four receivers of ice time hadn't changed much between seasons with Andrew Ladd, Blake Wheeler, Bryan Little and Evander Kane taking most of the even strength ice time in both seasons. However, Alexander Burmistrov and Kyle Wellwood, the next best forwards the Jets  had in terms of Fenwick Close (one of the stronger predictors of future success that we have), fell from 5th and 6th for even strength time on ice (TOI) per game to 6th and 8th.  Wellwood and Burmistrov's ice time was often given to weaker performers like Olli Jokinen and Antti Miettinen.

When these players were given extra even strength ice time, it was on the second line with Evander Kane, we can see how they influenced Evander Kane's performance by looking at Kane's shot-attempts and goals differentials with each player: 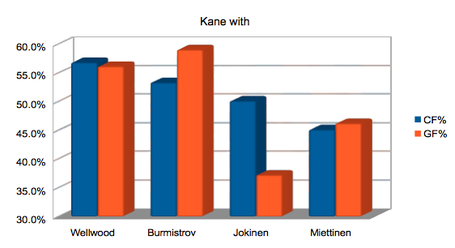 Now for some fun with numbers. Jokinen played nearly 472 minutes with Kane this past season, predominately with possession pylons like Antti Miettinen (or Chris Thorburn or James Wright) on the right wing. During that time they accrued 16 goals for and 27 goals agains for a -11 rating. If we gave that TOI to Burmistrov and Wellwood we would expect around a historical 55% shot-attempts differential, averaging out Wellwood and Burmistrov's normal results. As you can see, this is much stronger than Jokinen and Antti Miettinen's performance.  We can then use shooting percentages to estimate the hypothetical goal differential.

The norm would be the average on-ice shooting percentages for 2011-13 between Wellwood and Burmistrov with Kane. We can use Olli's piss-poor percentages as the low mark.

Some may point to the rumoured soured relationship bewteen Noel and Burmistrov to explain it, but Burmistrov is only used as one example of a player to replace Jokinen and/or Miettinen; compared to the performance of Jokinen and Miettinen, Kyle Wellwood, Nik Antropov, and Alexei Ponikarovsky were all good options.

The next example isn't discussed as commonly but is an important part of hockey. The effects of face-off wins are overly glorified in mainstream media; however, it does affect the game nonetheless.

Having a thing for size at center is not that unusual, since it can potentially help with board battles and other roles of a center. Face-offs are not necessarily one of those roles, at least in the Jets case. Of the centers, historically Jim Slater and Kyle Wellwood have been top performers, while Nik Antropov and Olli Jokinen have been less than exemplary. The younger centres, Bryan Little and Alexander Burmistrov, have been historically below 50% but have improved each season following a normal developmental arc, with Little falling above 50% in the 2012-13 season (where he will likely stay) and Burmistrov inching closer still.

Just like the veteran Ondrej Pavelec's save percentage, the four veteran centres all performed similarly to their career average, while Alexander Burmistrov and Bryan Little improved with experience and age. Regardless, Noel still decided for Antropov and Jokinen to take as many face-offs as possible.

Clearly, Kyle Wellwood was the Jets' best face-off option among 2nd and 3rd line centres.  For more fun with numbers, we can look at the face-offs taken when Kyle Wellwood was also on the ice with one of Alexander Burmistrov, Olli Jokinen, and Nik Antropov. Were this the case, rather than the sub-.500 performance the Jets actually experienced, we would expect a similar performance to Wellwood's historical average, causing the Jets to win an additional 27 of 285 face-offs (around 10% better). Or, since in our hypothetical world Burmistrov and Wellwood play with Evander Kane, hypothetical Kyle Wellwood woulc take all the 2nd line's face-offs, with an expected value of 59 additional face-off wins (out of 684 face-offs). It has been approximated that a team's goal differential improves by 2.45 goals per an average of 100 face-off wins; we can thus speculate that this would improve the Jets by an average of 1.4 goals. This doesn't include power play face-offs, which have an even stronger correlation to goal-scoring and would bump the improvement to about 2 goals.

It seems that in three key areas of the game, any logical prediction would dictate that coach Claude Noel had better choices available to him.  Had Noel simply chosen based on his players' career performance and career probabilities would have vastly improve the Jets goal differential, therefore earning them more wins (approximately one for every six goal improvement).

Obviously these variables don't act independently; they correlate to other variables, change outcomes, and there's a butterfly effect, but the range here is significant enough to envelop most of this. In fact, the higher end may even be more probable if you're believe in the psychological effects of momentum and positive thinking.

With the Winnipeg Jets essentially eliminated in the last period of the season, the slightest change could have pushed them into the NHL playoffs. Anyone could have been a little more lucky and given that push, but luck is out of a player's control.  However, evidence indicates that coaching decisions that can be controlled like goalie utilization, line combinations, and face-off takers and likely cost the Jets in the standings.