2013 NHL Playoffs: Are we to believe the Toronto Maple Leafs are hitting their way to the Stanley Cup?

The Toronto Maple Leafs made the playoffs despite being massively outshot. Leafs coach Randy Carlyle would have us believe that a lot of hitting made up for poor puck possession. They're winning, so he must be right. Right?

Share All sharing options for: 2013 NHL Playoffs: Are we to believe the Toronto Maple Leafs are hitting their way to the Stanley Cup?

I am well aware that I went the entire 2012-13 NHL season without contributing even a single sentence of value to this enterprise, snarky sentence fragments on twitter notwithstanding. But this comment by Randy Carlyle along with his defense of fighting (h/t:Tyler Dellow and Sean Fitz-gerald) kept me up late at night hunched over the computer (and not watching the games - there aren't any games to watch anymore, especially not at 1 am PT).

A little history is in order - when the NHL first started publishing its new real-time game stats, like hits and turnovers, people tried to figure out if they had any predictive value. I wrote something back in about 2005 that I can no longer find, but I basically found that the expected future goal differential resulting from a hit is basically zero. Others did similar analysis and never found anything, other than a lack of quality control among the NHL's official scorers (Toronto had 271% more giveaways at home than on the road this season). But Carlyle? Here's that quote, after managing "only" 18 hits against Tampa:

I realized that because everyone found that team hits - as opposed to a physical play that results in a recorded turnover - were about as useful as knowing the number of times the puck went into the benches in a season, nobody had ever gone through the effort to show when hits occur. Not surprisingly, like ice time for goons, they're very much an early game phenomenon: 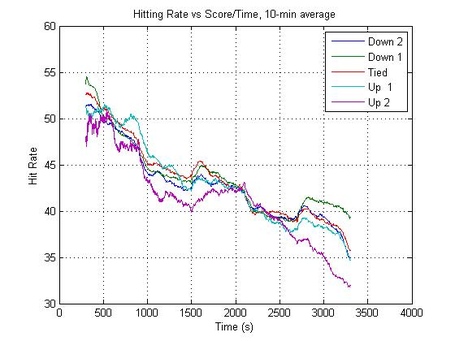 In overtime, teams hit at a rate of just 22.2. If Toronto's on their game when they drop a 50-spot on their opponents, then they're hitting for reasons that no other team in the league can fathom.

Another trend that's also unsurprising? Teams outhit their opponents when they're behind, more so when they're desperately behind early in the game: 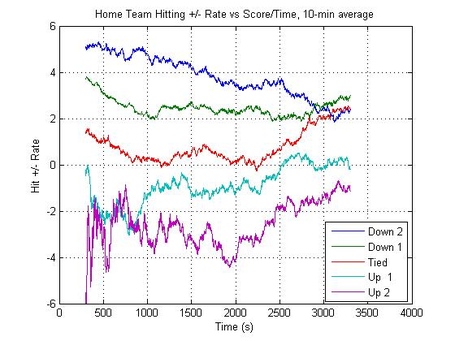 So maybe Randy Carlyle is innovating...Or maybe Toronto is just doing something yet again that doesn't make sense, like when they out-shot their opponents for years by not bothering to play defensively when they had the lead. Let's give the new regime of truculence a couple more years before we decide that they've figured out something that the rest of the league hasn't.