A lot of talk has gone around about the Jets' woes at the dot, but how much should we make of it?

The Winnipeg Jets have been allowing a lot of shots directed towards Ondrej Pavelec. A lot more than what is considered okay, and many individuals place blame on the Jets faceoff percentage.

Do Faceoffs wins affect the results?

A while ago -- pre-dating the existence of Winnipeg Jets 2.0 -- there was a really smart guy that ran this blog. His name was Gabriel Desjardins, commonly going by the alias of 'Hawerchuk'. He, and a few select and elite others, spearheaded most of what we know in advance hockey analytics. One thing he looked into was the effects of faceoff wins and losses on possession, shots, goals and wins in different situations. 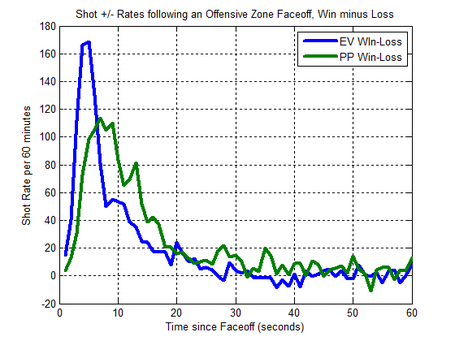 By the symmetrical nature of the conditions, the values off of a defensive zone faceoff loss would be the same but negative.

What do we see here? Well a rough take home would be winning a faceoff is good. The team gets possession of the puck and gets a chance to direct rubber to the net.

Well that's not really that helpful as everyone knows that. It's naturally intuitive and you can see it on the ice. The problem is the degree in how much it helps. This is where analytics is important. How much a faceoff win helps the team is not really intuitive as there are so many variables and actions going on the ice at once. We know that analysts like Mike Johnson and Glenn Healy love to comment on the importance of faceoff wins, but how important is important? In close games everything can be considered important and any small sample such as video replays can be as conclusive as any other form of confirmation bias.

This is one reason why analytics are important to both the fan and the organization. You ca not and should not guess these things, as anyone can guess wrong, whether the individuals are knowledgable or not. Recently Tyler Dellow wrote an amazing article on misconceptions. In it Glenn Healy is quoted in saying the Edmonton Oilers lead in every statistic (mentioning specifically faceoffs, hits and blocked shots), while failing to mention that the Oilers were outshot by a large margin of 44-23 by the Vancouver Canucks.

Most can grasp the intuitive things; the problem comes with knowing how much something matters, is indicative and predictive.

Back on to the topic at hand, the area under the curve measures the average shot boost from winning a faceoff in each situation. Then using normal shooting percentages you can determine the expected number of faceoffs needed on average to win per a goal. For example, we can determine a 5v5 non-neutral zone faceoff +/- of +41 on average equivelates to a goal differential of +1.

So what about the Jets?

Let's take a look at the data for our last three games:

Again, nothing that is earth shattering or new. The Jets have been pretty cleanly beaten in the faceoff department... but it is only 35 grand total losses. How dramatic is that?

If all 21 of the Jets' extra faceoff loses were exclusively in either the offensive or defensive zone (which they are not, it's closer to 50%), it still would only be expected to cost a single minus 50% of the time. Taking an average, you are then looking at about a goal against every 9 games. It is similarly true with the Jets' special teams faceoff differential (although the ratio contains a lower number of neutral zone faceoffs), so you are looking at a goal against every six-to-seven games.

This is obviously not optimal but not nearly damning... and that's with the Jets having an unsustainably low faceoff percentage.

What about Jets shots against then? The Jets currently are in the bottom five for being out shot in the league. We can use those shooting percentages to reverse the data from the goal differentials and give out the expected shot differentials from these faceoff loses.

Faceoffs matter, but there's a lot more going on here than needing to win a few more and they aren't nearly the deal maker a lot of narratives make them out to be. On top of this, the Jets current faceoff differential is not very predictive of the future, as Slater and Little are way off where historical success would project. Although, Scheifele and Jokinen will likely stay as negatives throughout the season.

The Jets' are currently at 41% with the third lowest faceoff percentage in the league. But, since 2006-07 season, no team has had lower than 44%, with below 46% being extremely rare. Not only are the Jets likely to improve with sample size, but, the overall parity of the league with faceoffs causes the differences to be quite insignificant.

As Gabriel notes in his original article, it takes a faceoff +/- of +245 to equal a win for a team over the duration of a full season, which is pretty extreme although slightly possible, and that no teams take sufficient enough power-play faceoffs to equal a win.

In the end, it's going to take a lot more than improving the Jets faceoff wins by about 6 a game (putting them at ~50%) to fix this: 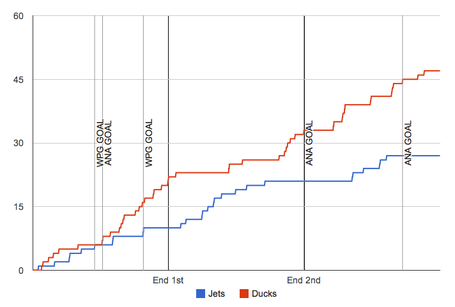