Mercurial more in the minds of the Winnipeg media than anywhere else, Evander Kane had a solid 2011-12 campaign offensively, realizing some of that great upside with a 30-goal campaign. Just as importantly, he was a scoring threat nearly the entire season; excluding 3-game April, January was the only month he wasn't able to muster 4+ goals. Regardless of what managed to go in, he maintained high shot volume throughout, giving us every reason to believe that at age 20 we're still witnessing his ascent.

You have to like that efficient even-strength production out of Kane, and since Ladd's Little Wheeler netted the biggest minutes at both 5v5 and 5v4 you can only imagine what kind of production he would have achieved given even more ice time. 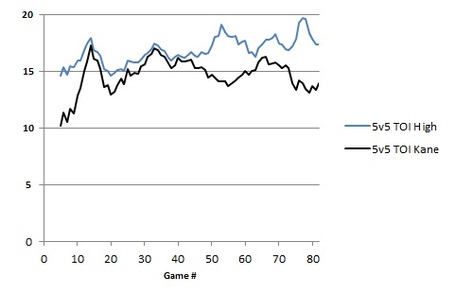 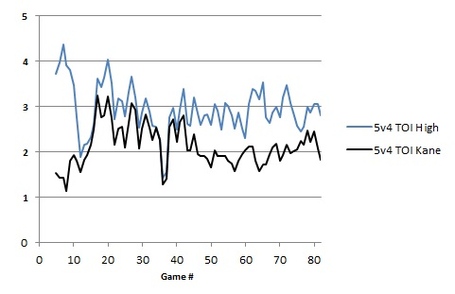 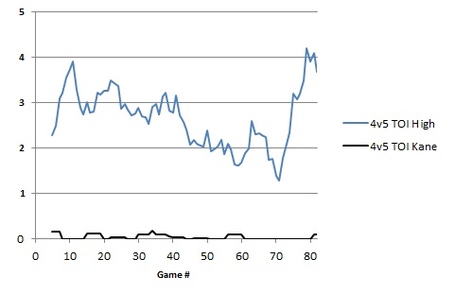 Early in the season, Noel seemed to be sending some messages Kane's way, which included benching and removal from some 5v4 time. After that was settled, Kane slotted into big-time minutes, only to see those minutes slip a bit as the stakes increased. 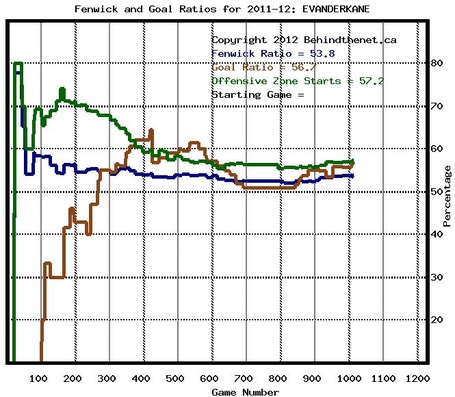 This chart is interestingly similar to Blake Wheeler's, which lends some credence to the argument that a little more time might have yielded some better results. That said, this is basically what we'd like to see out of a guy deployed in 2nd liner minutes, and especially if said player is only 20 years old.

He could stand to take a little more advantage of the cushy minutes, but his scoring efficiency and team-leading ability to draw penalties were statistical assets to what looked (at times) like a dynamite game. An added bonus is that, for such a physical player, he managed to keep his overall PIM relatively low (among forwards with 78+ road hits - I say that because he had 78 - he tied for the 7th fewest minor PIM of 38 players).

The $3.1 million cap hit was not quite as much of a bargain as Blake Wheeler's, but otherwise it was still a pretty great deal. You might remember one of my knocks against Wheeler was 4v5 time, and that critique carries over to Kane as well. Currently an RFA, Kane has one strong year to negotiate upon, but the Jets might be able to keep him around $4 million per year based on the other two years (remember, negotiations don't explicitly use the advanced statistics I'm discussing above). Even at $4 million per I'd be comfortable, especially because a.) I think he will continue to improve, and b.) wise management would probably attempt a longer deal right now. We'll see what happens...let's just hope the media doesn't try to spoil the whole damn thing.