I don't know that any player outside of Mark Flood (and maybe Ondrej Pavelec) has Winnipeg fans more divided than Tim Stapleton, a free-agent equivalent of a late-round flier draft pick, towards whom the Atlanta management threw a 525K bone during the 2010 offseason. Some of you might remember my concern that the Jets would go with David Koci over Steam Punk heading into 2011-12.

Thankfully, they gave the little man a chance, and he turned in career highs in every major offensive category.

In case you were wondering, that's dead-last among Jets forwards in 5v5 time. Even in regards to powerplay time, he doesn't appear to have been given significantly more time than a lot of his teammates; in fact, a decent chunk of his powerplay time was spent on the point. 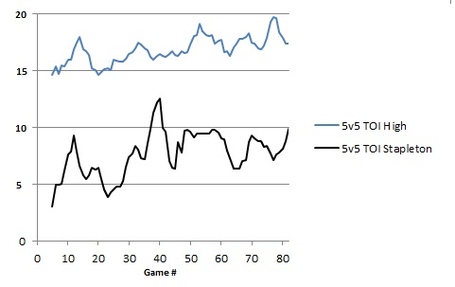 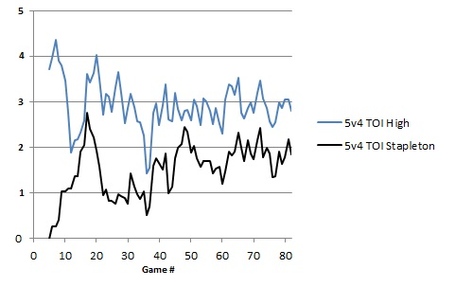 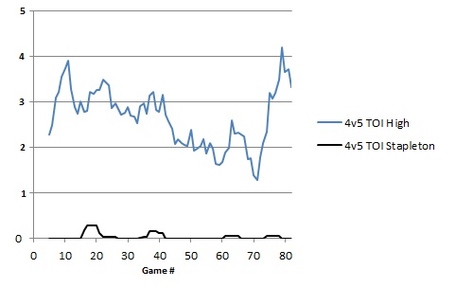 Stapleton was clearly low on the totem pole throughout the year at 5v5, not exactly a shining endorsement of his talent from Noel. It's hard to argue with him, really...Stapleton turned in a pretty bad Corsi Rel (-7.6) considering he faced the weakest competition among Jets forwards and received favorable zone starts (56.7%). On the flip side, he was one of our better players on the powerplay. 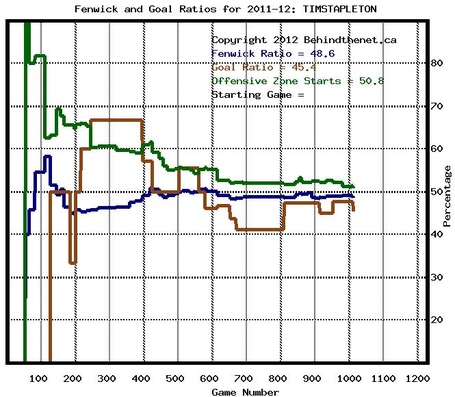 Overall, Steam Punk was not too remarkable, but not a major detriment...it looks like he had a dip in Fenwick early in the year that influenced his final numbers, though it's also hard to miss the wildly swinging luck goal-wise.

He was not good at 5v5, but he was solid during our prime opportunities (via powerplay). The latter doesn't quite offset the former, but hey, you wouldn't be able to say the same about Koci.