Share All sharing options for: BW Chart for Jets vs Devils 1/14

In a dose of coincidental hilarity, I was searching Google for previous BW Charts posts and found that I'm not the only horse in town. To wit, "BW Charts" already exist. Don't worry, not for hockey - for Starcraft and Warcraft. I suppose I would know that if I played either game. You can expect a name change in the immediate future, though I haven't decided yet.

Last afternoon's game was a bit less ugly than the Sharks tilt, but nonetheless deflating. We held the lead until the third, then two unanswered goals left us scrambling to get back in the game. Unfortunately, it doesn't look like we really scrambled much at all. 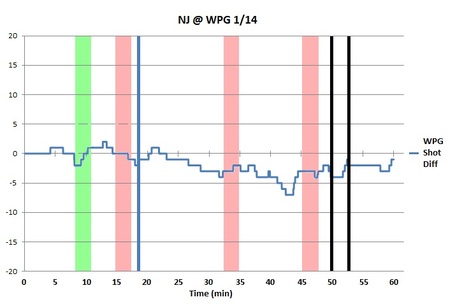