Preseason? More like Game 7 of the Stanley Cup Finals

I had the opportunity to take in the preseason tilt between the Jets and Canes tonight (for free). Absolutely electric. 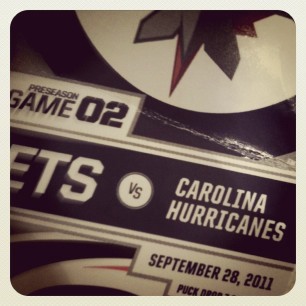 The MTS Centre was absolutely packed, for a preseason game? Yikes.

First order of business, get a jumbo draft for my brother in law (who hooked up the tix) and I. "That'll be $16.50 for two jumbo Buds" Yeesh. I guess I knew that was coming.

The face value of the tickets was $150 apiece. Not sure I ever had seats that good at the old Winnipeg Arena. I could see why the seats were so expensive: 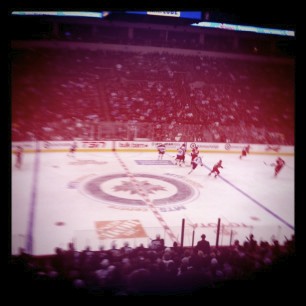 As we sat down I took a quick glance around the rink. The place was packed to the top of the upper bowl with fans. My stomach dropped. I wasn't prepared for that initial wave of emotion rolling through my mind. I felt a teenage tear of past playoff losses; hey, cut it out, this is serious manly business.

The jumbo-tron was rolling past NHL triumphs and tribulations; the fans went batshit loco when the Teemu rookie goal record clip played.

The Hurricanes came out of the dressing room to a massive chorus of boos (and "Booooooocher"). The Jets came out to a thundrous roar rivaling that of a hurricane (OK, I'm exaggerating, so I got caught up in the moment - so sue me... actually don't sue me, I can't afford season tix as is).

Cue the anthems. A pretty raucous, stirring sing along of "O Canada". Now it was time.

The puck dropped and within seconds I remembered the speed, beauty, and skill of the NHL.

The Jets dominated the 1st. I had to keep reminding myself this was "the battle of the backups" and merely a preseason contest. Zach Bogosian and Blake Wheeler stood out on offence (yeah that's right, it's not offense in Canada) for the home squad with some quick, inventive plays.

A couple of fans behind me decided to encourage Nik Antropov by exclaiming "Hey Antropov, put it first gear buddy. Or any gear." I can't say they were wrong. Ha!

I missed a little bit of the second (extensive washroom line-up), including the Carolina goal. I'll give them the period despite the fact that the Jets out shot the Canes 13-3 (so I guess I give them nothing). 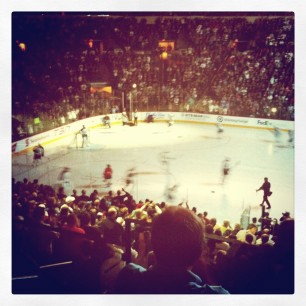 The third ruled. The crowd was super into every check, pass, spit, trip (I think you get the picture). Following the four-minute, high-sticking penalty to Carolina's Jaime McBain on Andrew Ladd it happened. Evander Kane scored the equalizer (the moment was almost as good as the Edward Woodward 80's TV show The Equalizer) and the MTS Centre erupted, including a pretty hearty brother-in-law hi five.

After calming down and remembering that this wasn't a playoff game there was little time until the next Jets marker. About a minute later, Blake Wheeler gave the Jets a lead. For good.

My confidence in this year's Winnipeg Jets was cautiously pessimistic about their playoff chances (teams don't usually go from 25th to 16th or better in one year), but the Byfuglien-less team I saw on Wednesday night looked quick, innovative, and competitive. It's going to be a crazy year.