Share All sharing options for: Mark Scheifele Projections and Comps

In the second of my two posts on projecting junior players, a commenter asked about Mark Scheifele's comps. I took the 100-most comparable forwards in junior - within two months of his age on draft day and with between 1.0 and 1.33 points per game, adjusted for historical context. Let's look at how many games those comps played, by percentile: 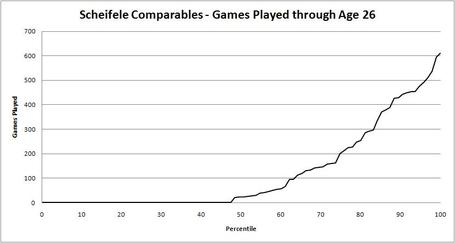 Overall, Scheifele's comps played fewer than three seasons in the NHL before Age 26 80% of the time. Those are terrible odds, so let's focus on the top end:

Those aren't bad outcomes, and there are a few other good players beyond the top 10, including some late bloomers who still brought value to their drafting teams: Russ Courtnall (also a #7 pick), Simon Gagne, Darcy Tucker, JP Dumont, Brenden Morrow, Ray Whitney, Ryan Getzlaf and Brad Boyes. But there have only been three bombs in the #7 draft slot in the last 30 years, so picking a guy there with a 50% chance of not having an NHL career seems like a really bad move.