The luck involved in scoring

Share All sharing options for: The luck involved in scoring

Admit it. There have been times when you anxiously watch your team fight and battle for the puck when they're down a goal late in the game. Someone cranks a shot, people crash the net, and in the ensuing flurry of pushing, falling players and whacking, the puck somehow goes in. You stand up and cheer but deep down inside you realize that it was a lucky goal. If you can admit that much, read on to see how much of that contributes to NHL scoring.

Others have written about the role of luck in team shooting talent based on statistical methods. I wanted to investigate the same question through a completely independent method: by watching NHL goals with your eyes. I defined 3 distinct categories (observed skill, observed luck, and undetermined) and watched all NHL goals from March 25-29 which gave us 158 data points.


Can luck really exist in a competitive sport? Sure it can. If you ever watched your team hit posts repeatedly in a game and declared that they just suffered some bad luck, then you believe in luck. "Bad" and "good" luck are just opposite sides of a distribution due to random error. If you believe in one then you believe in the other. Unless you reject random error altogether and conclude that Ilya Kovalchuk misses some of his shots on purpose just to keep us entertained, then you can do that. If that's the case then what a coy player he is, that Kovalchuk. 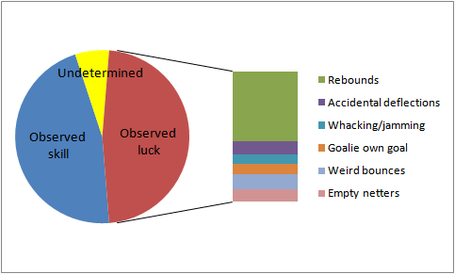 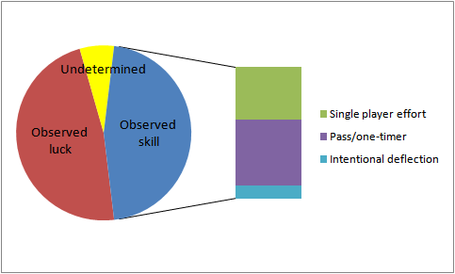 Explanation of method: I'm calling these variables observed skill and luck because they rely on watching hockey with your eyes (the "observed" part) and also to clarify that they do not intend to actually represent true skill and luck. They simply stand in as proxies for true skill and luck for the purposes of this analysis. We can arguably say that some skill was involved any time a team has possession of the puck and shoots and scores. How much skill a for particular goal is up for debate, but for here I'll say that it is all skill. On the other hand, any time a shot is made and the puck pinballs off people in front and lands somewhere so that an attacking player scores, that is mostly luck. I think it's reasonable to say that because the shooting player cannot choose where the rebound will land: it's a result of many different physics that are beyond his control. Since we are assigning goals made up of mostly skill as ALL skill then it's also fair to assign goals that are mostly luck as ALL luck. To be safe, any gray areas will be put in the undetermined category and not count for or against either category (but will be a useful estimation of error at the end of the analysis). You might not agree with this system and that's okay. How good these categories represent true skill and luck is up for debate. I admit, it's not a perfect system but I think it's a pretty good one to answer the question at hand.

Conclusion: observed skill and observed luck are defined here as proxies for real skill and luck and are based solely on watching the game. The undetermined category gives us a sense of error for this method (these goals could fall into either category). This analysis gives us an estimate of 47-54% of goals are observed luck. The results agree pretty well with statistical methods that estimate that luck contributes to 38% in a team's standings and 33% to individual scoring.