With all of this analysis of professional athletes, regular people might feel a little left out. A little while ago, I linked to a post by my old roommate - he loves recording data, and he posted a spreadsheet of how many hours he slept over the last three years. I was actually in the middle of a similar (but much more short-term) recording project and since I was sidelined with an injury for the last few days, I figured it was a perfect time to take a break and post the results at the 60% point in the process.

I'm not going to lie - I am a huge fan of chicken wings and sugary beverages. And no matter how much I exercised over the last however many years, I was stuck at the same weight. I postulated that my metabolic rate was lower than other people, but that was just willful ignorance of the impact of the wings and drinks.

So, starting at the beginning of January, I started tracking everything I ate and all explicit exercise I engaged in (walking around the office does not count; running 5 miles or playing hockey certainly does!) Here's 90 days worth of eating and exercise data: 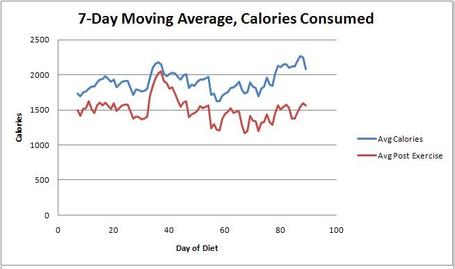 So what do we see here?

1) Around day 35 or so, I got sick for a week, so I couldn't exercise. I'm also really hungry when I'm sick, so you get a spike in calories consumed.

2) Around day 50, a higher level of fitness really kicked in. I increased my treadmill running by 50-75% and I started playing hockey more. And I got a lot hungrier, as evidenced by the increase in the nominal number of calories I consumed.

The real question, though, is what the impact was. I weighed myself at the gym at least four times a week and drew a line through the results - each individual day's weight is merely a sample of my true weight: 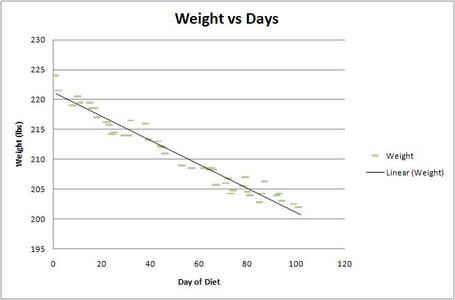 Bottom line: after I counted exercise, I consumed about 1500 calories per day. Given a 20-pound weight loss, the implication is that I have a resting metabolic rate of 2300 calories, which is roughly what the internet calculators predict.

I'm going to start round two (60 days worth) on Monday, so I'll update in mid-June.