Share All sharing options for: Inefficiencies in Irrelevant Markets

Judging by the number of people who ask me about it, Malcolm Gladwell's 'Outliers' must be the single best-known book about hockey. Sadly, nobody seems to know that his fundamental premise - that Canadian minor hockey is biased against children who are born later in the year and produces fewer NHL players than it otherwise would as a result - is largely wrong. Here's what Gladwell says:

"I brought up this very fact with one of the most senior officials in the Canadian national junior hockey program, and pointed out that Canada was squandering the talents of hundreds of boys with late birthdays. I asked [an official] why he didn't just start a parallel league, with a cut-off in late summer. He shrugged and said it would be complicated. Complicated! I don't think, as a society, we are always particularly smart about how to make the best use of our talent."

First of all, there is a bias in Canadian junior hockey against kids who are born late in the year. This chart of birthday distribution among junior players born between 1964 and 1984 shows the effect quite clearly: 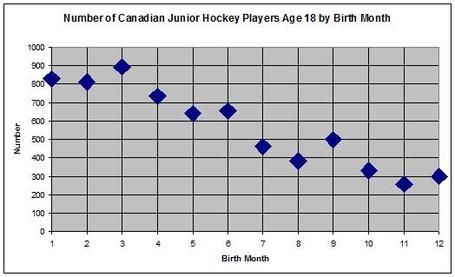 If we group players by quarter, the ratio of Q1 birthdays to Q4 ones is 2.86:1 for Canadian teenage hockey players. So how can Gladwell be wrong? First of all, it's important to compare players when they're the same age. Players born in Q4 are nine months younger than player born in Q1, on average. They're often one grade behind in school, they go off to play junior a year later, and, most importantly, they get drafted a year later. So we need to compare Q1 birthdays from a given year to Q4 birthdays from the previous year. That changes our conclusion somewhat:

So when we group players by their draft class, we find that the bias against Q4 birthdays is about 20% lower than we thought it was. What if we project four years forward and look at who's playing in the NHL?

Now we see that the original estimate was 60% high. But we're still counting every player who played one game at age 22. Let's restrict our dataset to players who played either 70 games in a season or scored 30 goals in a season by age 25, and just for grins, let's look at players who had 100+ penalty minutes. At age 22, their birthday ratios are:

What's happening here? The junior coach is only going to have his players for 2-3 years, so he needs to pick kids who will help him win now. Kids born in January will be bigger and stronger than kids born in December of the same year, so it makes sense to pick them with such a short horizon. But NHL teams have a 6-7 year outlook, and all they care about is a player's ultimate ceiling. So when they look at 17-year-old kids and try to figure out who'll be the best when he's 25, birth month plays a very small role. It's not zero - clearly even the very best players are about 35% more likely to be born at the beginning of the year. This means that despite a flawed selection system based on win-now incentives, at least 75% of the very best Q4 talent still makes it to junior hockey. (And goons and marginal players are much more likely to be born at the beginning of the year. I'm not sure we care.) There are plenty of other systematic mismatches within the system - for example, players from the WHL are much more likely to play pro than guys from the QMJHL, and Canada is also quite poor at developing non-white players - that don't seem to elicit the level of interest that the birthday paradox does.

So is Canada "squandering the talents of hundreds of boys with late birthdays"? There were 578 NHL players who played 41 games or more last season. If we assume a 45% bias against Q4 birthdays, then the NHL is short up to 52 Canadians across a wide array of birth years. But are there really 578 long-term NHL jobs? Doubtful. So maybe the suboptimal player selection process shorts Canada about 40 players over a 10-year period - or four players per birth year.

If Canada wanted to develop four additional players per year, would the most efficient strategy be to create a parallel league at every age level for boys born in the second half of the year? I doubt it. Take Manitoba, for example - a province of 1 million people has just six AAA bantam teams. If you created a parallel league, you'd have to dilute the overall talent level (or play with just three teams or travel to Saskatchewan), which I think would counteract the benefits of putting kids born late in the year up against other kids closer to their own age.

Essentially, Gladwell found an irrelevant inefficiency, though it wasn't quite as irrelevant as his look at how one team came to dominate 12-year-old girls basketball. Just like the tricks that worked at age 12 probably don't carry over at age 13, NHL scouts and coaches look closely at a player's age, and as a result, junior players with Q4 birthdays are 65% more likely to make the jump to NHL jobs than their Q1 counterparts. Outliers is an interesting story, but it missed the real lesson here.