I watched all of the scoring chances in this series, and I found that Pittsburgh made more bad defensive clears and giveaways that led directly to scoring chances than Montreal did, by a margin of 10-6.  So I was wondering if the official scorer recorded more defensive zone giveaways for the Pens.  Nope: 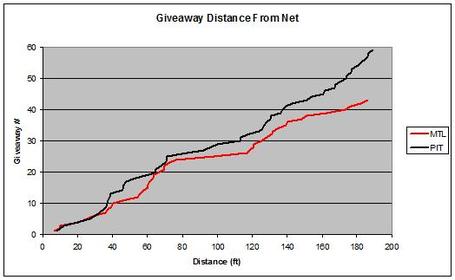 As you can see, the first 10 giveaways by each team are approximately in the same locations.  Pittsburgh then had a few more giveaways 40-50 feet from the goal, while Montreal had a few more just inside the blue line.  The expected goal differential resulting from the locations of those defensive zone giveaways is very small.

Here's something that surprised me - giveaways by zone when the score was tied:

If that looks like a team bearing down and committing fewer mental errors in close games, you could have fooled me.  But what we also see is Pittsburgh making an extreme number of turnovers when they were trailing in the game:

That looks like Pittsburgh digging a hole for themselves when they were down.  For completeness, here's the same data for Pittsburgh leading:

So Pittsburgh didn't do themselves any favors when they were losing...And Montreal didn't do themselves any favors when the game was close.  If Montreal was winning, their giveaways made them more likely to continue winning; but if the game was tied, they were more likely to get behind.  Giveaways are not what decided this series.