When I started following sports more than 25 years ago, there were records that seemed unbreakable to me: Bob Beamon's 29-foot 2.5-inch long jump in the Mexico City Olympics; Roger Maris hitting 61 home runs in 1961; and Terry Sawchuk's 103 career shutouts. Beamon's record lasted 23 years, Maris' 40 years, and barring unforeseen circumstances, Sawchuk's will fall this season after 46 years to Martin Brodeur.

Setting records like these requires a perfect storm: an athlete has to hit his peak performance at exactly the right time - Beamon would have set the world record regardless with his jump, but being at 7200 feet above sea level in Mexico City propelled him even further; Maris was 26 and coming off an MVP season in 1960, so his power explosion was not unexpected, but the AL's talent dilution in the 1961 expansion helped his cause. And Sawchuk had the good luck to break into the NHL just as it was entering a prolonged period of low scoring.

Let's look at how many NHL games have ended in shutouts since 1945...

The relationship between league-wide scoring rates and the percentage of shutout games is almost perfect. (Indeed, the r^2 is 0.81.) When Terry Sawchuk played his first NHL games during the 1949-50 season, NHL offense was dropping dramatically and would stay low for a decade. Shutouts spiked to a ridiculous 13% of all games in 1953-54: 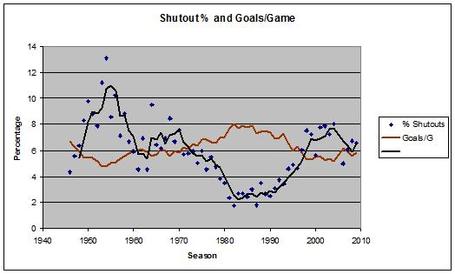 Sawchuk got himself most of the way to the record by 1956: he racked up 65 shutouts in his first six full seasons, and had to hang around for another 14 years to pick up the next 37 (he had one in his 1949-50 call-up). Brodeur, on the other hand, made his debut when shutouts were at an all-time low; it wasn't until his fourth season, 1995-96, that league-wide offense had dropped sufficiently low for him to start racking up shutouts. At age 26, he still trailed Sawchuk by 30, but from ages 27-35, he had 65 shutouts to Sawchuk's 31.

So when Brodeur gets his 104th shutout, does that finally make him better than Sawchuk? I think it's instructive to look at each goalie's shutouts relative to the rest of the league. This table shows the number of shutouts Brodeur and Sawchuk had at each age compared to how many shutouts the average goalie (excluding them) would have had in the same number of games:

As you can see, Brodeur has outclassed the average NHL goaltender well into his 30s, while Sawchuk was basically at league-average by Age 26. It's difficult to compare 1951-52, when half of the league's goalies played every minute of their team's games, to the modern era - with almost all of the NHL's six goalies in any given season now inducted into the Hall of Fame, it's possible that the average goaltender was simply better back then. But with Europeans and Americans joining the game in large numbers in the 1990s, it's difficult to argue that the NHL wasn't proportionately better than it was 40 years earlier. Brodeur's accomplishment - both overall, and in his peak years - absolutely eclipses Sawchuk's.