Sunny Mehta brings up an interesting point in the comments about one-goal games:

"if you owned an NHL team and could somehow swallow the puck for three periods and get to OT every game, your team would be guaranteed 82 points plus a ~50% shot at 82 points = 123 points on average in a season!"

I've shown the effect Sunny is referring to below. I took a .500 team and a .450 team and simulated their seasonal point totals at different league-wide scoring levels. At 3 goals per game (roughly where we are today), the .500 team gets roughly 10% more points per season than the .450 team. As goal-scoring drops, the gap between the teams drops, until it's non-existent if there's no scoring: 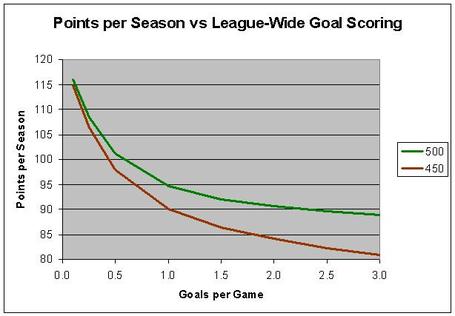 If we played every game until somebody scored the winner, this effect wouldn't exist. But the NHL's overtime and shootout system awards extra points to teams that go beyond regulation, and, in particular, awards points in no relation to any consequential team hockey skill in the shootout. If you were running a bad team, it would be to your advantage to play as defensively as possible during the regular season. All else being equal, if you reduce your goal scoring and your opponent's goal scoring by the same percentage amount, you'll be more likely to make the playoffs. Of course, the real rewards don't start coming until goal-scoring drops to about 40% of its current levels. It would be tough to build a team that played that defensively.