Where the Thrashers "fell short" in acquiring organizational depth

One of of the greatest advantages to looking over history is the ability to learn from past mistakes and successes.

Share All sharing options for: Where the Thrashers "fell short" in acquiring organizational depth

Rarely does one read an article in the news or see a comment online on the Winnipeg Jets' organizational depth without seeing a statement along the lines of Kevin Cheveldayoff inherited a franchise with bare cupboards. Often this follows with the Atlanta Thrashers organization being contrasted to the Jets' current motto of draft and develop.

Where did they fail though? Was it that they rushed their prospects to the NHL too early?

When evaluating draft selections as either successful or unsuccessful, it is best to compare the selections performance relative to the traditional expected value of said pick and the strength of that year. Goals Versus Threshold (GVT) is a statistic that estimates the extent a player improved a team's goal differential relative to a replacement level player. While GVT is a flawed statistic in that it relies heavily on shooting and save percentages much like plus/minus, it does a decent job at detecting general trends for player value, especially at large samples.

When people discuss rushing prospects or high profile busts, it's usually in regards to first round picks. These are the picks that have the greatest chance to successfully developing into a regular roster player.

Figure 1. Value of Thrashers' first round picks between 1999-2010 relative to expected value of picks. 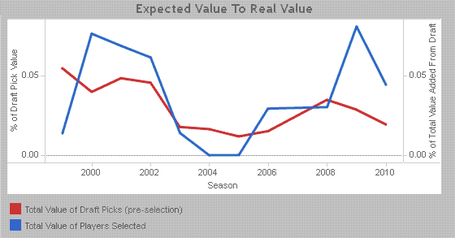 Only three draft years out of twelve did the Thrashers significantly under performed the expected value of their first round draft picks. The selections for those three years were Patrick Stefan, Boris Valabik, Alex Bourret.

Patrick Stefan was a 6'2, 200 lbs, over point per game 17 year old in the now defunct IHL, which was almost at par with the AHL for quality of league. According to Brian Burke, part of the conditions with trading the first overall pick to the Thrashers would be that they would not select either Henrik Sedin or Daniel Sedin. The next non-Sedin selection was Pavel Brendl, who posted a career total of 22 points. There has been speculation that two major concussions in Stefan's first post-draft season lead to his ultimate undoing, although it should be noted that Stefan currently is the 4th highest all time non-Sedin scorer from that year's first round.

Boris Valabik was the typical 6'7, 245 lbs, no points, huge penalty minutes, character driven, stay-at-home defenseman that many "stat-types" say teams should be wary of drafting early. Valabik totaled 19 points in the OHL with over 150 games played. With the eventual rule changes to end the dead-puck era, Valabik's weaknesses such as his poor skating became even more exploitable. Valabik ultimately played only 80 games in the NHL and accrued 7 points, all assists.

Alex Bourret was drafted sixteenth overall, a tier in which AIH's own Grind81 found had less than a 1/3 chance of becoming a top 6 player. Injuries and concussions surround the Bourret story much like Stefan, although Bourret has been often criticized for poor conditioning unlike Stefan. Bourret never played an NHL regular season game.

The Thrashers also had five drafts where they well over performed the average value of their draft selection. Dany Heatley -now a shadow of what he once was- has scored more goals than most first rounders from that year have accrued points. Ilya Kovalchuk was a career point per game player. Bryan Little has evolved into a legitimate first line centre despite being drafted in a tier that only becomes top 6 caliber less than 50% of the time. Evander Kane is evolving into a prolific 5v5 scorer only at only 22 years old. Alexander Burmistrov may unfold into a "what could have been" type story, with strong possession play and development progression trending towards an above average top 6 player.

For all the talk of rushing prospects being Atlanta's ultimate failing, only six of the Thrasher's thirteen first round draft selections played in the NHL in their Draft+1 season. Four of those players were in the group of five players who outperformed (or were trending) towards outperforming their draft pick value. One selection, Zach Bogosian, has performed close to par of their draft selection value, and there is evidence injuries may have been the larger factor than rushing. All that remains is Patrick Stefan.

The values here measure cumulative contributions as opposed to looking at pace, so young players are penalized for not having the time to accrue as much value.

If the first round selections trended above average for value on average, where were the Thrashers failing in creating organizational depth?

In truth there is more than one answer. Part of it was the Thrashers multiple decisions to strip themselves of future assets for NHL players, sometimes with worse consequences than normal. Another factor was the Thrasher's failure to retain their NHL talent, due to a combination of unfortunate and deserved circumstances.

There is another main reason. The Atlanta Thrashers were a terrible drafting squad outside of the first round. Abominable and horrendous levels of terrible.

As you can see in the graph, there is basically no value earned outside of Tobias Enstrom. Spencer Machacek, Patrick Dwyer, Derek MacKenzie, these are some of the best non-first round picks of this franchises history. That's sad. Ondrej Pavelec (who is measured at 0 value per GVT) is the only second round pick to play more than forty NHL games. That's sad. Klingberg has the third most NHL games with ten. That's sad.

Late round picks tend to fail, so it is not completely out of the norm; however, this is beyond typical expected failure.

Figure 4. Value of Thrashers' non-first round picks between 1999-2010 relative to expected value of picks. 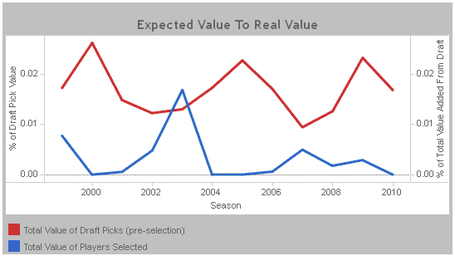 A trend this severely poor is unlikely to be pure coincidence. So, how does a team that scouts first round picks above league average fails so miserably at acquiring talent outside of the first round? The answer may lie in the developing side of draft and development, but not with typical accusation with rushing picks.

The Atlanta Thrashers farm team all but two years of their existence was the independently owned Chicago Wolves. The Wolves have long time been accused of sacrificing development for winning. The team would often buy some of the best AHL regulars and place them in major roles.

What does this mean for the Winnipeg Jets and their fans?

Not much, but we can say that the Jets and Kevin Cheveldayoff have yet to succeed in drafting and developing where the Thrashers failed. The Jets have yet to have a player, who was drafted outside of the first round, play a single NHL game. Significant value from such a player is a long way out. This is not to say it can't happen, but we don't know yet. And if you look at the 2011 draft, Adam Lowry hold almost all the cards for non-first round picks.

Thus far the Jets have only succeeded where the Thrashers thrived. Again this could change as the 2011-13 draft classes ages, but it is hard to prove the Jets superiority thus far. Mark Scheifele currently trends at expected value for draft position while Jacob Trouba is trending significantly above. Both player's careers are far from over, but currently they are the Winnipeg drafted players in the NHL. They are the only proven commodities on which Kevin Cheveldayoff can hang his hat.

Will the Jets suffer through the same mistakes that plagued the Thrashers? At this stage most Winnipegers will say no, but there is little evidence to support or dismiss this... yet. The Winnipeg Jets hope to excel in drafting and developing but it is not as if the Thrashers wanted to fail where they did. The Thrashers employed many of the same amateur scouts. They had trainers and coaches who would look over development. The Thrashers held a prospect camp where they taught many of the same things other teams teach at developmental camps.

In addition, the St John's IceCaps are a team trying to balance winning with developing, an act difficult to perform according to Assistant General Manager Craig Heisinger. Still, some have claimed that Heisinger cares more about the AHL team's success than development - even though there is little evidence to support this. The Jets were one of the highest spenders for AHL talent, predominately due to acquiring AHL veterans Andrew Gordon and Jarome Samson with NHL contracts. Samson and Gordon together with Jasson Jaffray were among IceCaps top minute munchers, receiving an estimated 5 more minutes per game than young prospects such as Carl Klingberg, Adam Lowry and JC Lipon.

Will the Jets learn from the Thrashers past errors? I'd like to think so, and it seems quite possible; however, this is purely speculation and not yet a provable or disputable fact as of yet.

All graphical data courtesy of Matt Pfeffer's draft visualization feature on Hockey Prospectus and data is up to 2012-13 season only, so no 2013-14 season included.

Special thanks to former Atlanta Thrasher's writer Ben Wright for giving some inside information.