In all honesty, Winnipeg Jets defender Mark Stuart gets more flack for not being the most skilled defenseman than he probably deserves. Yes, Mark Stuart's 49% Fenwick (and falling) rating over the last 3 seasons is tied for the lowest of Jets regular defenders to play 500+ minutes, but it is not the lone reason the Jets have yet to make the playoffs and it is a far cry from some other team's "worst" defenders. (For example, Douglas Murray has averaged a 47% Fenwick over the same period of time on playoff teams)

At the age of 30 and with 10 NHL seasons under his belt, Stuart reached a career high for icetime per game, as well as his second highest points per game total. This speaks volumes in regards to the team's defensive depth. Three years ago Stuart was their 6th defenseman when everyone was healthy.

With Ron Hainsey choosing to stay in the eastern conference, Mark Stuart received a significant boost in short handed and even strength ice time. This also came with a sever increase in difficulty of minutes. Historically, Stuart has been around the team average for zone starts, but this year Stuart was deployed far more in the defensive zone. Stuart also tends to be hidden from the other team's top lines, yet this season his line-matching was in the middle in terms of difficulty. 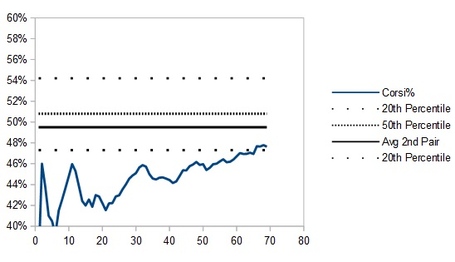 Mark Stuart did improve as the season went along, and significantly so after the hiring of Maurice (at game #35 for Stuart). Although, part may be due to minutes with Jacob Trouba; Stuart had a 48.3% Corsi with Trouba, while Stuart and Trouba had 46.7% and 50.5% respectively when apart.

The graph above compares Stuart against second pair defenseman due to his 15.33 5v5 TOI per game, although most see Stuart as a third pair player. So, here is the same graph as if Stuart was playing on the third pair. 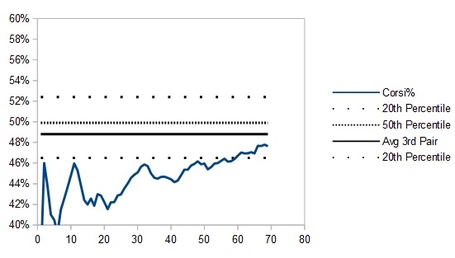 Mark Stuart is an "okay" third-pair defenseman for overall results. He's also supposedly well respected in the room and a great example for off-ice training. Stuart will bleed for the team which makes him well liked, especially in a blue-collared city. This also makes for great stories and narratives in print.

Stuart has received a four year extension, meaning he's likely to be on the team for a lot longer. While he's not a terrible third pair defenseman, he is at an age where decline starts to accelerate. The concern is more that Stuart may prevent the Jets from improving their defensive depth by being a mainstay a bottom pair while needing to be sheltered, a role you'd want for easing in rookies on a young draft and develop team.

Bonus: It could be far worse 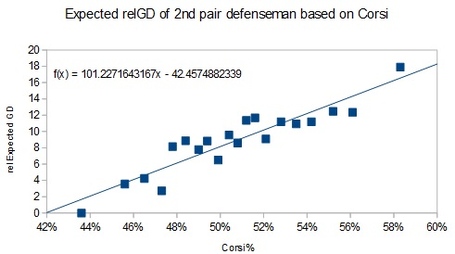 The above graph is taken from a large project of mine over at Hockey-Graphs. I took every player season from 2007-12, separated them into different lines/pairs, than sorted by Corsi%. Each dot on the graph represents 25 player seasons. This graph essentially shows the goal differential in one year you should expect for a 2nd pair defenseman relative to the worst 5%. It basically the +/- a player "deserves" rather than the one he got.

Mark Stuart's 47.6 Corsi% means that Jets on average would expect Stuart to be hurting the team's goal differential by about 2-4 goals (relative to 2nd pairing defensemen mean and median). That's one point in the standings on average. This is a far cry from the expected reduction that a 0.906 starter gave the Jets.