Everybody love Mark Scheifele. He is infectiously happy and he loves hockey. Mark's rookie season was a bit of a roller coaster. Early struggles led to a mid season bloom, followed by a disappointing injury to end the year.

Scheifele's total production was solid, though not spectacular. The fact that most of his production came in the later half of his season says great things about his potential. Scheifele's play earned him top six minutes. Still, his shot production was solid, but his shooting percentage ended up a little high. Is 13% sustainable? Perhaps, but it would be on the high end. Where Schiefele really shines is in his penalty differential. Scheifele created 13 more powerplays than penalty kills. That speaks to smart play and creates a large advantage for his team - approximately an extra two goals over the course of the season. Every little bit helps.

Mark Scheifele jumped right into a top six role as a rookie and he wasn't really sheltered. His numbers place mid pack in almost all categories. Scheifele wasn't used on the penalty kill, but he more than earned his powerplay time. It will be interesting to see both what kind of matchups Paul Maurice gives him next year and what kind of attention he garners from the opposition. 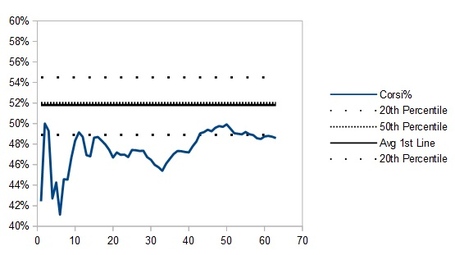 These numbers aren't pretty, but it is worth noting that they improved substantially post-Halischuk (they were really bad with Halischuk). By the numbers Scheif gave up a few too many shots defensively - the likely had to do with opposing coaches sadling him with their heavies, and the shot creation was a little low too. A full year of top six minutes will give us a much better sample.

Mark Scheifele was learning on the job and his coaches weren't sheltering him. Very few players can carry possession against top flight players as a rookie, the fact that Scheifele couldn't is no surprise - especially considering he was asked to carry one of the biggest possession drags in the NHL. Possession aside, Scheif showed plenty of positive signs and started to prove his merit as a scorer.

Keep him. Hold him. Squeeze him tight.

There are a lot of sub 50% numbers on this table, but Scheifele was in the plus with Kaner, and Frolik.

He was also in the the positive in all of his minutes apart from Matt Halischuk.

Nothing against Hali, I appreciate how he plays the game, but the numbers are consistently horrible.