After only playing five games last season, the Winnipeg Jets were finally able to get a look at Anthony Peluso... depending on what your opinion of finally is.

Peluso's counting statistics do not appear that great at first. His points per TOI though is actually at par for a fourth line player. What is interesting though is that neither of the Jets coaches trusted Peluso with any ice time, with Peluso playing a full 2 minutes less than any other player. Unless Peluso becomes the next Joe Thornton or Alex Tanguay, those shots per minute numbers will need to rise. 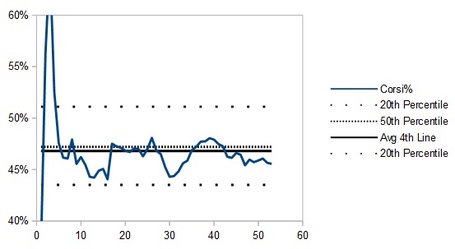 The numbers indicate that Peluso was just slightly below average, but also do not take into account that Peluso was in a battle with Eric O`Dell for easiest minutes on the team. Normally dCorsi% numbers would give some indication to how a player performs relative to their usage; however, Peluso played so few minutes per a game that he didn't even make enough minutes with 53 games played.

The Jets organization and some members of the media have sold Peluso as a more than just an enforcer; a fighter who can also play. The odd thing is neither of the Jets coaches have treated him as such. He has scored at a decent rate for an enforcer and looks to have good hands, but his previous AHL production and current shot rates suggest they may not be sustainable. His two-way numbers are also something to be concerned about.

In a bit of a head scratcher, the Jets gave a 25 year old a two year contract from a five NHL games look. The salary was basically league minimum, so it wasn't a contract that would be difficult to bury, but was was interesting none the less. His contract essentially costs nothing and he probably would never be a risk from waivers, so there is no need for the Jets to worry about keeping or losing. Hopefully though the Jets will have at least 12 players above Peluso in the depth charts.

This goes into a tangent, but... statistical guys often get inaccurately labeled as those who hate fighting and enforcers. This is technically false. The truth is that the whole point in sports analytics is in changing the way and order we value things. It's not that we say that grit, character, leadership or other intangibles have no value, but that they fans and/or GMs value these items over other things that will help improve the team more.

Peluso played a few games in 2012-13, so we can slightly adjust the sample on the chart to a bit bigger... but doesn't really add much to what has already been said. 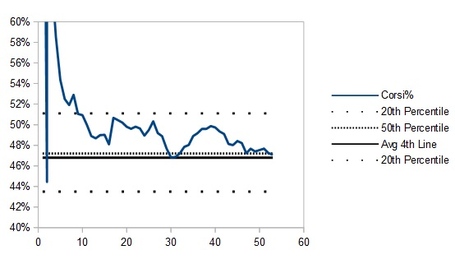