As a late edition to the Winnipeg Jets lineup, Keaton Ellerby was simply asked to fill holes created by injury. Injuries persisted and Ellerby became close to a full time player. Now he is a restricted free agent and General Manager Kevin Cheveldayoff has a decision to make. Does he qualify him?

Keaton Ellerby isn't blowing the doors off offensively, but his six points is still more than a couple Jets forwards picked up this year. He average time on ice was the lowest on the team, so he wasn't being asked to do a ton. There really isn't much to see here. The +8 penalty differential does provide some nice hidden value. That differential on average would account for a +1 or so in the team's goal differential.

In addition to being the Winnipeg Jets least used defender, Keaton Ellerby was heavily sheltered and didn't get much time on ice with the special teams units. In an ideal world the team would get a little bit more special teams value out of their depth defenders. 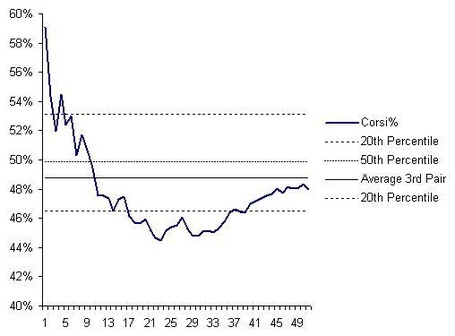 These numbers are ugly. The fact that Ellerby was sheltered, but still put up poor raw possession stats doesn't speak well to his effectiveness. The dCorsi takes the numbers one step further. Throwing Ellerby over the boards seemingly neuters the Jets offense without adding anything in-terms of shot suppression.

The numbers suggest that Keaton Ellerby isn't very good, but it is worth noting that he is relatively young - younger than Zach Redmond for example. Unfortunately for Ellerby, he doesn't excel defensively and he doesn't bring any offensive skills of note to the table. While he is young, he isn't a player that screams upside.

This is a tough question. Cost controlled assets are always a plus, but in this case it might be worth parting ways with the RFA.  Players like Zach Redmond and Paul Postma bring more special teams value and they post better numbers (possession and counting). The Jets would be better served adding a quality UFA to the roster or giving ice time to someone who has a little more upside.

Keaton Ellerby doesn't really present anything interesting cases from a stats perspective, so let's use the bonus section to give him the award for best hockey hair.