Corsi only tells part of the story, but how much of Byfuglien's story does Corsi tell.

Over at Dustin Byfuglien's entry in the Pilot's Logbook series, the hot topic is Byfuglien the defenseman versus Byfuglien the forward. The argument essentially boils down to a rehash of the age old debate of shot quality and the big mistake. I started to pull some numbers to test my own stance and decided the extent of the information is enough to justify an article of its own.

If you are new to hockey's underlying statistics, there is something you should know: no one has ever thought Corsi is everything. No one.

But, is Big Buff an exception to Corsi?

All numbers are for 5v5 from extraskater.com and stats.hockeyanalysis.com. The values relative to team are just a difference between Byfuglien's values and the team's values during the same stretch of games. This is not like relCorsi% which is the difference with the player on the ice and the player off the ice.

While Byfuglien has been a minus player since he was traded to the Atlanta Thrashers and moved to defense, the franchise has actually been outscored more severely than the big defenseman; a fact often ignored when quoting Byfuglien's plus/minus.

As a fan of how graphical data improves understanding of numbers (believe it or not), here is the same information in visual form: 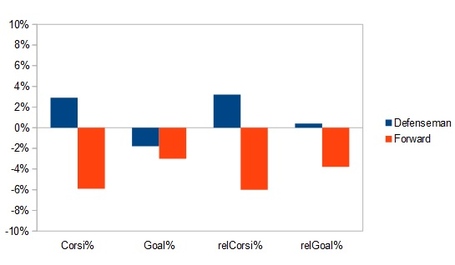 The truth is, Byfuglien on defense improved the Thrashers/Jets goal differential on the long run, despite the fact that Byfuglien (and Enstrom) played the most against players who tend to outscore the opposition. Goal% is highly volatile to outliers and can take a long while to regress.

Corsi isn't everything, but it still is a lot. If you want a simple way to look at it...think of it as a +/- spell-check.

I had some more stuff on stability of Corsi and regression of goal%, but I've decided to leave that for another time. Here though is one snippet as a preview.

All values are for 5v5 and from stats.hockeyanalysis.com.

Pretty interesting if you ask me.

A side note: a good portion of Ellerby's and Pardy's TOI is when Byfuglien was a forward.