Eric Tangradi, Chris Thorburn, intangibles, and the limits to Corsi

A deeper look into the numbers of Eric Tangradi and Chris Thorburn. Plus an open discussion on on-ice results, intangibles, and where they matter.

Share All sharing options for: Eric Tangradi, Chris Thorburn, intangibles, and the limits to Corsi

The Winnipeg Jets placed Eric Tangradi on waivers yesterday, and then he cleared them safely today. This action opened some great dialogue on analytics between the few discussion mediums I frequent. I thought I might as well take advantage of the situation to springboard a few topics. Some of the topics have been touched on by others here.

This is not one article on one subject, but multiple little articles connected and illustrated by one example (or really two).

What was Tangradi's relationship with Corsi?

Over the past three seasons combined, Eric Tangradi has posted a 51.0% Corsi percentage. At over 660 minutes of 5v5, you can be pretty confident that means the Jets enjoyed creating more chances and spending more zone time in their opponents end than their own when Tangradi was on the ice.

In all honesty, Tangradi would unlikely post similar numbers if he was leaned on in the same way as Ladd, Little, and Frolik are. But, these are still solid results. Between 2007-12, only 25% of fourth line players have posted similar or better Corsi%.

Should you care about a fourth line players Corsi?

Analytical types like Corsi. Why? We care not for shots over goals, but future goals over past goals.

Players who out attempt their opponents tend to outscore their opponents, both in the present and future. The future is the important part. This holds true for fourth line players, although only relatively speaking: 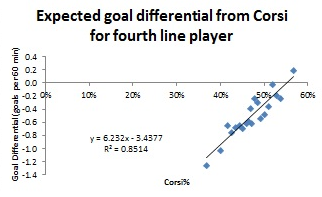 The above is from Hockey-Graphs.com, each dot represents 30 player seasons, using data from 2007-2012.

When making evaluations on players, how much a player lends to a team's goal differential should be one of the larger variables, if not the largest. Corsi is currently the best at measuring that, even when a player's current Corsi% differs from their current goal differential. 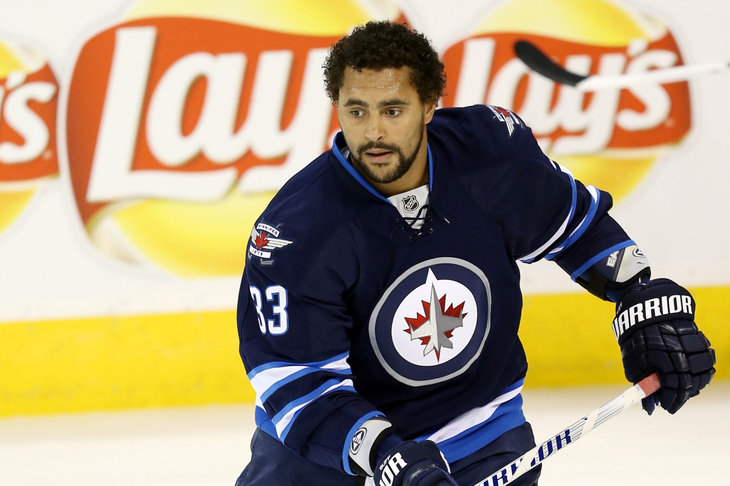 Looking deeper with the new wave of analytics

Some have questioned why Tangradi posts strong Corsi percentages. It is a legitimate question. Is it something he does well? Is it luck? Is it linemates? Is it his usage? How does one improve their Corsi numbers?

Tangradi performed superior than the average for the remaining Jets forwards. Only Kane performed better than Tangradi in producing entries that resulted into shots. Only Kane was able to successfully break out of the Jets zone per puck touch more than Tangradi. The denial of zone entries are extremely too small for significance, but is anecdotally interesting to note he performed extremely above average there too.

Tangradi was not a perfect player by any means, but we are talking about fourth line players.

So you are saying it is a huge loss?

The individual loss is not huge; in fact, it is not much at all.

Value in goal differentials between top and bottom 5% Corsi players

Eric Tangradi was a fourth line player for the Jets. Fourth line players only carry so much influence with their minimal ice time. In addition, the type of minutes they play also diminishes their overall impact.

Still, some impact is different than no impact. With so much parity in the league, the tiniest boost counts.

The on-ice results value difference between players like Anthony Peluso and Chris Thorburn is about five goal improvement in the team's differential. On average five goals amounts to an extra win, but likely over exaggerated a tiny bit for fourth line players.

What is the issue then?

The issue is in the process. I do not wish to "beat up on" Thorburn, but his recent three year signing plays a role. Nothing happens in a vacuum.

It is more likely that the Jets on-ice play for those minutes would be superior had Thorburn not been extended and Tangradi kept up instead.

Looking at on-ice value, the existence of Tangradi (and TJ Galiard) are examples of why you do not need to extend someone like Chris Thorburn for three seasons.

But what about intangibles like being good in the room and leadership?

Despite the on-ice results, Thorburn was extended and Tangradi was demoted. The decisions did not materialize without reason. Perhaps with good reasoning or perhaps not, but reasoning existed. There are two possibilities; either management disagrees with the metrics above, or they believe Thorburn makes up for his play elsewhere. For Tangradi, the choice unravels similarly but with intangibles diminishing Tangradi's value.

Intangibles get a lot of flak from analytic types. The statistical blogosphere mocks intangibles because of over usage. They get thrown out as a catch-all reason to defend any decision that seems unwise from a performance standpoint. It cannot always be intangibles. Also, management and coaches cannot always be right.

That is not the same thing as saying intangibles are not real or they have no value. Intangibles are real. Look no further than the social sciences if you need evidence. Recently Stean Wolejszo eloquently explores the context of intangibles as latent variables in like leadership. Two years ago Kent Wilson discussed distinct and diffuse effects in selecting fourth line players.

For those who do not major in sociology or psychology like Wolejszo and Wilson, the basis revolves around indirect impacts. A video game example can be found in RPGs (forgive me but I have not been an avid gamer since the demise of the Super Nintendo). There are characters who are not altogether powerful, but assist by making the powerful characters even stronger. Hockey players can do this by improving morale, cohesiveness, attitude, work ethic, etc.

In this theory, the net overall improvement of the team outweighs the loss value from inferior on-ice play. The low on-ice value of a fourth liner minimizes the cost in terms of lost results.

Are intangibles super important then?

There is an issue on making evaluations and decisions based off of intangibles: it is impossible to know when you are right or wrong and by how much.

Hockey is a very physical and passionate team-oriented support. Players are instilled with training, experiences, and doctrine that promote leadership, character, teamwork, and other intangibles. Most overtly poor character players are weeded out or corrected prior to reaching the NHL, while the strong move on in Darwinian fashion. There is a reason why hockey players all seem the same.

This is why we, as a statistical community, take the stand that we currently do on intangibles.

Although about baseball, recently Tango Tiger explained this standpoint:

But when it comes to chemistry, leadership, and intangibles? Sabermetrics is agnostic on this point. It doesn't actively dismiss it as irrelevant. But neither does it try to pretend it can figure it out without evidence for support. So, it just stands on the sidelines, and take no position either way.

Without any evidence -other than feelings and experience- you could potentially stand at an almost random chance in correctly evaluating the influences of intangibles. It also becomes increasingly difficult to stay objective in decision making.

What about the Jets then?

For me, I see two very separate examples on the Jets of the "right" and "wrong" way.

Mark Stuart is a defender who lacks the talent to play as an efficient top four defender. His play is not terrible though. His overall metrics are poor, but not below average for a third pair defenseman. When deployed properly and minimally, he has his uses. The intangibles are a potential bonus that may make a very average bottom pair defender have plus value. If you are wrong about Stuart's impact from intangibles, he is at least not harming you.

The Jets/Thrashers organization has been outside the playoffs for seven seasons, the second longest active streak in the NHL. During the last few seasons, the top end of the roster has been relatively sufficient in terms of on-ice metrics for being a playoff calibre team. The goaltending and the bottom half have not been. It is that same bottom half that is being anointed as those who bring the much needed leadership and character.

So what has been costing the Jets the playoffs then? Are the Jets' goaltenders really that bad and everything else is good enough? Is the Jets' top end of the roster lacking in areas not being caught by the on-ice results? Or maybe, just maybe, the Jets' bottom end of the roster not bringing enough intangibles to make up for their play?

The truth could be any of these, or a mix thereof.