Throughout the season I will be tracking every goal scored against and for the Winnipeg Jets, in order to evaluate the goaltenders. Here I present the first installment of the results.

As some of you may know, I spent a lot of time last year working on a Winnipeg Jets goaltender performance tracker over at JetsNation.ca. The goal of this was to try to get a more objective evaluation of Ondrej Pavelec (and Al Montoya), as I wanted to create a way to establish what percentage of the goals scored against him were his fault, and which could be blamed on the team defence in from tot him. The results were pretty interesting, and since nothing has really changed in regards to the Jets goaltending situation, here I am again (with a few adjustments and additions) to give you season two!

In addition to what I did last year, this season I will be breaking everything down to even strength and special teams situations, I will be tracking opponent numbers, and I plan to include much more photo-evidence of what exactly is going on in front of the Winnipeg Jets goaltenders. I also eliminated the "no chance" section from my evaluation on the advice of Chris Boyle, creator of the shot quality project, who after my final results last year explained how proper positioning and decision making should always give goalies a chance.

Since these articles are going to get pretty long, I will publish them in a three week rotation of Ondrej Pavelec's numbers, Michael Hutchinson's numbers, and opposing goaltender's numbers. This week we will start with Pavelec, so let's get to it.

Ondrej Pavelec's even strength save percentage isn't exactly where you want to see it, but he has made up for it thus far with his work in special team situations. It's important to keep in mind how small this sample size is. Pav has a long history of going through streaks of excellent play, only to completely fall apart and disappoint in the long run. That being said his overall save percentage is above league average despite a full game against the Sharks and a decent amount of time against the Kings, so enjoy it while it lasts.

Yikes defence. There will be some photo evidence of this below, but it's pretty easy to see here what the problem has been. The Jets have been sloppy in the neutral zone, bad with the puck, and just not very smart in general to start the year. Sure a big save here or there would be nice, and a week of practice might help turn this around, but to this point things have been about as bad as many predicted it to be. For comparison sake, Pavelec only gave up 17 odd man rush goals ALL SEASON last year.

This gives us a bit more perspective on how I have perceived things so far this year. Considering the circumstances mentioned above, these numbers aren't too concerning. That being said; I have noticed a couple issues in Pavelec's play that have me concerned, but I'll get into that below. I believe that this will even out a bit and be able to tell us more in a few weeks/months, but it's nice to see no huge issues statistically just yet.

This book has been out on Pavelec for a while now. Last year it was his blocker side that was targeted for the most goals against (30.7%), and it's off to a big lead once again. Maybe he should have worked on that a little more than this whole 'fitness' thing. Just saying.

Ahhhh, the fun stuff. Here I will be breaking down some of the goals that gave me trouble in my determinations, highlighting issues I have with goaltender play, and in some cases pointing out the mistakes by team that led to goals.

Why not start with the first goal of the season? I had to watch this game the next day, but I was following along on twitter and the rampant Pavelec-hate had me think this goal was going to be brutal. Shockingly, I don't put too much blame on Pavelec for this. Here's why:

But Travis! Look how deep Pavelec is! Okay, fair. I agree that Ondrej is way too deep in his net. His newly in shape body should have put a lot more effort into challenging that shot. But when your entire team gets caught puck watching and you allow anybody to walk into the slot like that, I have a problem with placing much blame on the goalie. Plus, check out this screen by Jacob Trouba:

Now this goal was the one that really annoyed me. This was the vintage Pavelec mistake. Take a look on the slider. Pavelec starts in perfect position to stop the puck. That's a good thing. The problem is his ridiculous over-commitment to making the initial save. In fact, he is so committed and confident that there was no way it was going to be deflected, that he watches the imaginary puck into his chest, slides out of position, and leave a wide open net to be scored on. 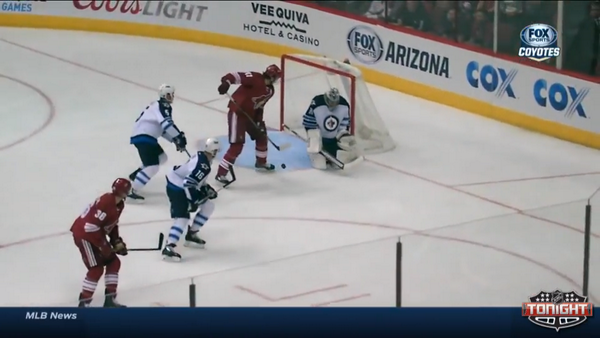 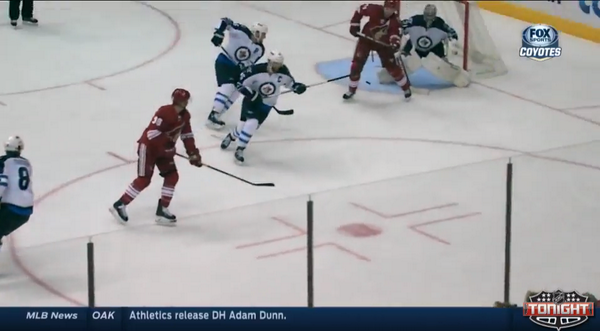 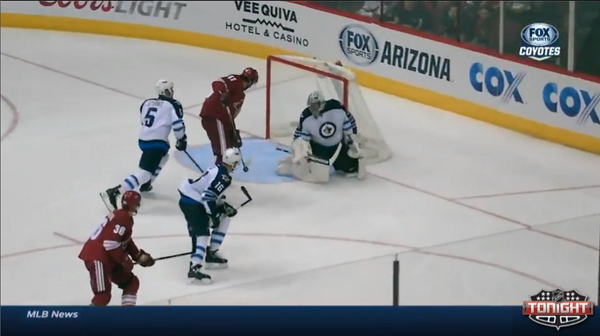 I file this goal under the "Pavelec, use your brain" category. First things first, on the broadcast the initial reaction was that "Pavelec didn't get a look at the shot". Now, use your eyes everybody. Pavelec gets a look at this. Is a great look? No, I wouldn't say so. But he can very clearly see the puck when the shot is taken:

Now, the confusing part. With that look, Pavelec reads that the shot is going to be high. But as I am sure you can also see, there is going to be traffic in front of the net. So I ask you. What's the logical thing to do? Go into the butterfly, thus taking away the bottom of the net and just letting the puck hit you, or raising up (to leave the bottom of the net exposed) for the chance to catch a puck (that's likely missing the net) in your chest? Seems obvious right?

Well, not to everybody:

And guess where the puck goes....

Alright, this goal kind of makes Zach Bogosian look silly. So if you are a die-hard Bogo guy, you may want to avert your eyes. (Warning - there is another one that makes him look brutal next week as well...sorry?)

Let's start with the...good? Bogosian gets the puck after some Jets zone time, but ultimately turns it over. To be clear: he is in good position to recover from the turnover at this point. Worst case scenario the Sharks come down on a 2-on-2, which should be handled decently.

See? Everything should be fine. We forgot about one thing though. Poor decision making could throw this whole situation into shambles.

For some unexplainable reason, Zach Bogosian decides to come across the ice and take Trouba's assignment. Ladd clearly (and justifiably) didn't expect this, so he is going off for a change. Meanwhile, this leaves Patrick Marleau absolutely wide open to receive the breakaway pass. He does, goes in painstakingly one on one, and scores to put the Sharks up 3-0.

Just because I can't say it enough: THIS IS A CRAZY SMALL SAMPLE SIZE. At this point of the season, you really can't read too deep into anything. What I am taking out of this is that although Ondrej Pavelec has put up some decent numbers to start the season, I see issues and trends that have been present for a long time that haven't changed. That worries me in regards to the sustainability of his numbers (well, that and his history). I also see some pretty scary decision making by the team as a whole in both the neutral zone and the defensive zone, which will only compound the problem.

Luckily the Jets have had a full week of practice, and some of those team issues should have been addressed. We will have to wait and see as the schedule picks up going forward.

Be sure to check back next week as I dive into Michael Hutchinson's number to start the year.