Evander Kane didn't ease his way unnoticed to the city of Winnipeg but came in, kicked ass, and took names. While his YMCMB attitude has pushed some buttons of the sullen populace, and also some of his decisions over twitter have been questionable, the truth is Evander Kane is the Winnipeg Jets' best player under the age of 25.

He's been called rash, immature and one-dimensional by some and once even called "not a natural goal scorer" by a member of the local media. That is okay though, because Kane (similar to us here at Arctic Ice Hockey) will continue to embrace the hate. He continues to shut his critics down and wins this writers poll unanimously.

Evander Kane is a pretty special player and a prolific goal scorer, and even at a young age he's already accomplished a good many things.

As a sixteen year old Kane finished his WHL rookie season with 24 goals and 41 points, placing him second and fourth on the team in each respectively. The fact that he suffered from mononucleosis earlier that year made those feats even more impressive. Kane followed this season up with an offensive explosion; his 48 goals the next season was good enough for first in his team and second in the entire league. He was a late addition to Team Canada in the World Junior Hockey Championships and finished the tournament with a point per a game average. His success was then rewarded with a 4th overall pick by the Atlanta Thrashers organization, during their second year of diving down for top 5 picks in their roster rebuild. Three months later Kane began his NHL career.

For the second year in a row, the Thrashers franchise decided to push their first round selection instantly into the NHL. At 6'2 and nearing 190 lbs while playing a very transferable North-South NHL stylized game, Evander Kane was probably ready for the NHL, but not the role in which he was placed. Coach John Anderson decided to use the budding offensive star as a defensive player. Kane faced the highest level of competition of all the Thrasher's forwards that season while being deployed in the defensive zone more often than not. He was also usually paired with two of Nicklas Bergfors, Rich Peverley and Jim Slater. All things considering, Evander fared pretty well, placing 5th in point production, even out-pacing Bryan Little, and 3rd in goal production.

When it comes to scoring goals Evander Kane is in the elite territory.

That's it. Those are the only guys in the NHL who out-paced Kane for goals at the same age. Five of whom received substantially more minutes per a game, most of whom were on the team's main power play unit, and all of whom had a higher shooting percentage. The career shooting percentages are placed beside to show how some of the players ahead of Kane benefited from a few bounces going there way.

For the most part, natural goal scorers who stay at the top year-in-year-out control their destiny by creating a large volume of scoring chances with directing as many pucks towards the net as possible. The opposite style --high quality, low quantity shooters-- is where you see players who tend to have large career spikes which they rarely repeat (see Winnipeg Jets' Bryan Little).

So, how does Kane perform with generating shot volume?

Looking at all forwards over the last two seasons combined with 500+ mins in 5v5 situations:

The only place where Evander Kane isn't in first place for throwing pucks towards the net is when including all shot attempt types (Corsi = blocks, goals, shots, misses; Fenwick is same but without blocks), and the one person ahead is a terrible goal scorer named Alexander Ovechkin.

However, hockey isn't just about scoring, but about outplaying your opponent. Evander Kane had a solid progression in his shot differential numbers in his first three seasons, improving consistently each year... although with easier zone starts and better quality linemates each season. His fourth season wasn't as strong, but his quality of line-mates fell down, a lot (thank you Antti Miettinen and friends).

Let's see how Kane has done with his main linemates over the last two seasons combined:

For a visual representation of the same thing: 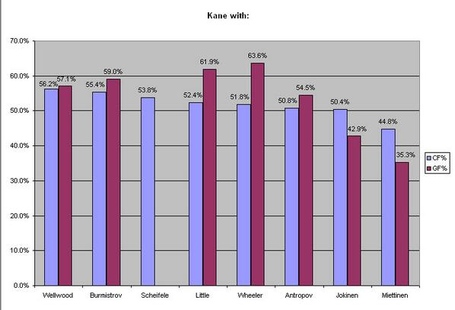 Keep in mind that GF% (essentially +/-) is a measurement on what occurred, while CF% (+/- including all shot attempts) is a stronger predictor of what future would likely be.

Unfortunately for Jets' fans, Kane's two best linemates will not be returning this season, and may never return. However, in the small sample size Mark Scheifele has shown promise when with Kane (although the third member usually was one of Alexander Burmistrov or Kyle Wellwood). Regardless of whether the centre ends up being Mark Scheifele or Olli Jokinen, at least fans can take solace in that Devin Setoguchi is unlikely to be the anchor that was Antti Miettinen.

While Evander Kane still seems to need either quality linemates or cushy zone starts to substantially overcome his competition, the Winnipeg Jets luckily have Andrew Ladd who can take those tough minutes thus allowing some minimal sheltering for Kane.

Evander Kane's ability to generate offense in even strength situations is already in the elite territories and will likely keep him as a consistent 30-40 goal scorer for many years to come. He is improving defensively and in the powerplay, but he will need to take some further steps in those areas if he is to overcome Andrew Ladd as the 1st line left wing.

Finding a longterm centre who can mesh well with Evander Kane, and therefor have the pair compete with Bryan Little and Andrew Ladd for minutes, would push the Winnipeg Jets further towards contention than anything else... other than league average save percentage.

<!-- ######## START FULL WITH FACEBOOK LIKE BOX SNIPPET ######## --> <!-- TIPS: 1. Replace <iframe> with your facebook page embed, otherwise it will use the default SB Nation FB page. 2. IMPORTANT: Be sure to remove the inline 'width' and 'height' attributes from <iframe> embed code. 3. IMPORTANT: In the event that you use your own code, be sure to make sure the border_color portion of the <iframe> looks exactly like this: border_color=%23ffffff&amp; -->
<div class="likebox-fullwidth"><iframe src="//www.facebook.com/plugins/likebox.php?href=http%3A%2F%2Fwww.facebook.com%2Farcticicehockey&amp;width=560&amp;height=185&amp;colorscheme=light&amp;show_faces=true&amp;show_border=false&amp;stream=false&amp;header=false" style="border:none; overflow:hidden;" allowtransparency="true" frameborder="0" scrolling="no"></iframe></div>
<!-- ######## END SNIPPET ######## -->

You may notice we are going in reverse order (starting with #1 and heading to #25). This is because we want you to get involved and vote as we go along, so that we can compare our similarities and differences.