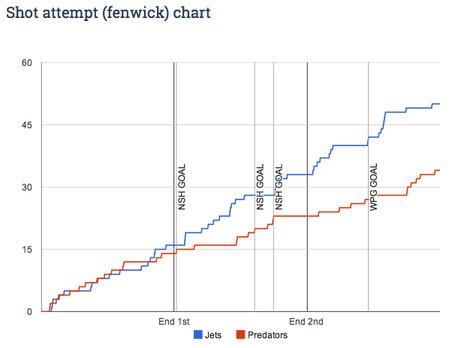 * How often is the 4th line this good for the Jets? Yes, they got a huge offensive zone start advantage... but they only allowed one shot attempt in 5v5 situations for the entire game. Only one! 4th lines don't really score; that's not their goal. So we know one line did their part.

* Too bad about the Jets first line though. Ya, they had really tough zone starts and saw a LOT of Weber (about 60% of their 5v5 icetime), and maybe Noel should have spread out the load just a tiny bit more... but still... ouch! Last two seasons, the one thing the Jets could depend on was the top line taking tough minutes and beating them.

* (Most of) The Jets didn't suck, and the game was a lot closer than it seems. Jets out possessed and directed more pucks at the net then the Predators in all situations (tied, close or 5v5). The Jets were even close in their scoring chances, with the Predators coming out on top with 10-9.

* Enstrom-Byfuglien should probably be reunited permanently.