As we shift over to defencemen, I'm also going to shift over the charts a bit. For the time on-ice charts, instead of showing the team high and the player's TOI, I'm going to use charts similar to what I used here. Basically, the player's TOI line is expressed as a percentage of the team high TOI at either 5v5, 5v4, or 4v5; thus, 100% means that player was the top TOI, and as you go down they were getting less, relative to the top. This should make for some smoother, more coherent lines - I also included (in ghostly grey) the TOI lines of the player's fellow defencemen, for reference.

Dustin Byfuglien seems like a good choice to first demonstrate these new charts, as we know he'll show both extremes (a lot of use at 5v4 and 5v5, very little use at 4v5). For me, he's such an enigmatic figure (How can that be? He's not Russian!); an incredibly plus Corsi player who is visibly bad in his own end. My working theory is that he pours shots on and around the net, driving his offensive contributions up high enough to mitigate the defensive game. Closer to the truth, he and Tobias Enstrom make for a dynamite offensive-defensive pairing, and the combination of positive possession and favorable zone starts keeps their shots-against at reasonable levels. Criticize all you want, but that's exactly what you'd want a player to do with those minutes.

Interestingly, Buff posted the same number of points that he did the previous season, though in fewer games (81 in 2010-11) and with fewer powerplay points (24 in 2010-11). It is quite obvious the dude is given a lot of ice time, and you have to think that will change a bit as Zach Bogosian becomes an increasingly viable NHL defenceman 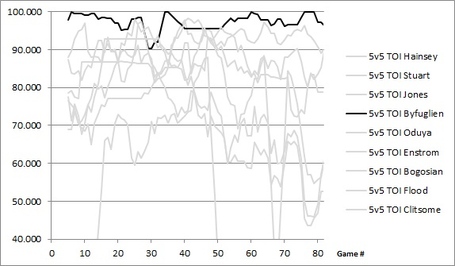 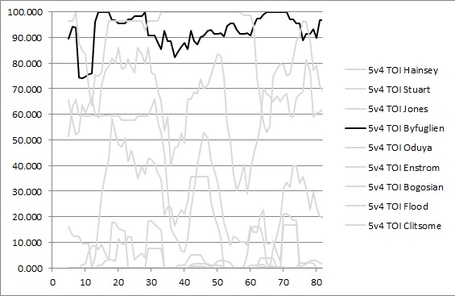 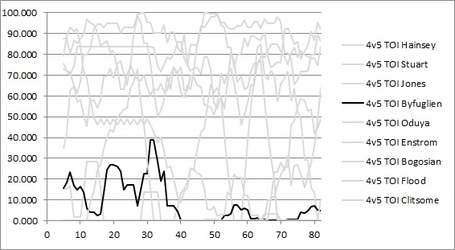 Outside of a brief few dips at 5v4 and some early season penalty-killing, we pretty much saw the bulk (get it?) of Bustin's time occur at 5v5 and 5v4. Incidentally, that temporary drop in 5v4 time fell to Enstrom, as he was given a lot of 5v4 time after returning from injury. This is one of the more consistent charts you're going to see, as Bustin's role was clearly defined despite all the concerns about his weight in the preseason (remember that?). 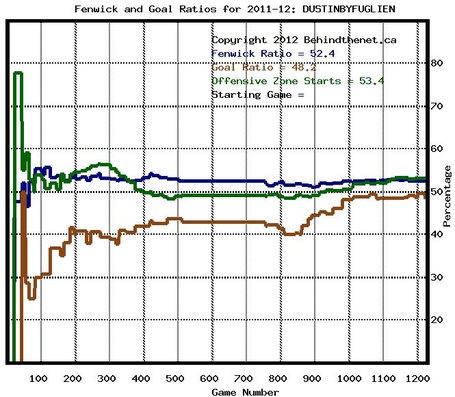 Kind of crazy to see that Bustin was getting unlucky for over half the year.

Performance/Usage Grade: A
I mean, you really want the guy to reduce those little mistakes (okay, sometimes big mistakes) in his own zone, but when we want him to help create offence he certainly fits the bill. Or squeezes into it.
Performance/Contract Grade: B+
Part of me really wanted to hate on this grade, but as I was going to the grocery store to get the Haterade, I took a gander at the salary cap hit leaders for defencemen. He comes in 18th, well below the company of every-minutes players like Zdeno Chara, Shea Weber, and Duncan Keith. I mean look at the players around him and tell me who you'd rather have right now: James Wisniewski, Mike Green, Keith Yandle, Byfuglien, Michal Rozsival, Paul Martin, or Chris Pronger. Personally, though, he's our highest cap defenceman and he doesn't play a lick of 4v5, so that's why I downgrade him a bit.