Blake Wheeler was undoubtedly one of the Jets MVPs this year, turning in career highs in assists, points, and shots on goal, leading the team in the former two categories. Most of you will remember it didn't start out so promising for Wheeler; through the first month of the season (11 games), he had four measly assists and seemed in danger of losing powerplay time. But as the team took fire in the winter months so did Wheeler, and he never really looked back.

Some really juicy TOI numbers for a guy that completely took advantage of them. You really have to love seeing this out of your 25-year old former 1st rounder. The part I like most is how many of his points were attained at even-strength...Wheeler was not one of those players who needed powerplay time to pad his stats. 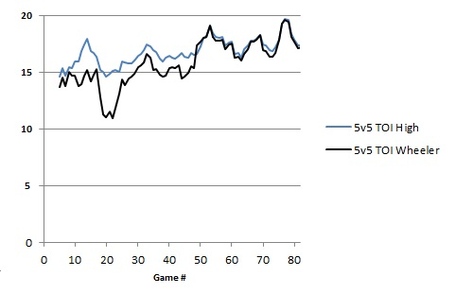 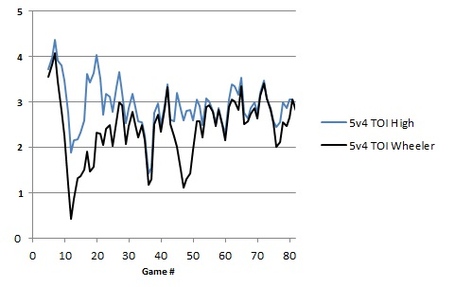 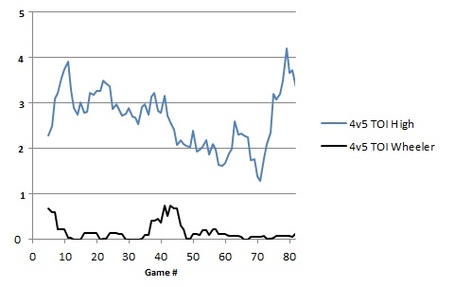 Generally, these charts document the initial uncertainty about Wheeler to the later absolute certainty. These are the minutes you give to your best forward, and Noel was right in this regard. 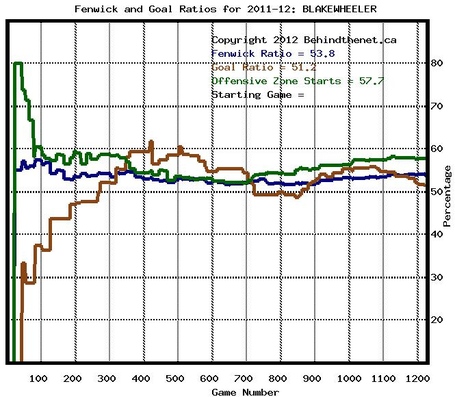 This is what it looks like when all the pieces fall into their right places. Goal ratios that are positive, but not overly so, positive Fenwick, and positive zone starts rightly awarded. Though not the kind of big-body player that plays the physical game, nor parks in front of the net, I think the pros far outweigh the cons with Wheeler's game. Did I mention he's not afraid to block some shots?

Wheeler got nice minutes to work with, and he turned in one of the best offensive performances on the team. The main things keeping him from the A+ are his lack of 4v5 time and truly elite offensive numbers. They're small bones to pick, but worth picking from a guy with charts like this.

Wheeler, coming into the season, re-upped his contract with the organization for 2 years at $2.55 million per year. What a freakin' deal at nearly $2 million per less than Andrew Ladd. He's RFA again after next year, though I imagine he won't come quite as cheap. Regardless, another example of savvy signing by Cheveldayoff & Co.