Finally, we come to one of our TOI monsters in Andrew Ladd. Deployed in all situations, Ladd experienced a bit of regression from 2010-11's numbers (29 G, 30 A, 59 PTS), although considering it was his assist total that regressed it might have been the luck of his teammates that took a little downturn. That said, this edition of the logbook will give us a good look at what a full-minutes forward looks like...

Sure, the guy took annoying penalties in the offensive zone, and it always seemed like he was the guy blowing good scoring chances by missing the net, but he and the rest of Ladd's Little Wheeler took their minutes and played some plus hockey. 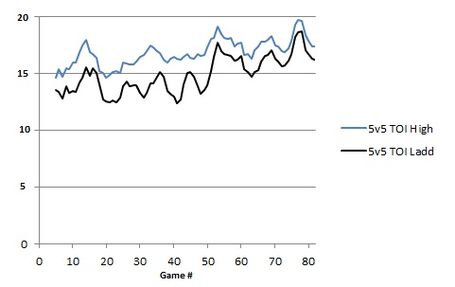 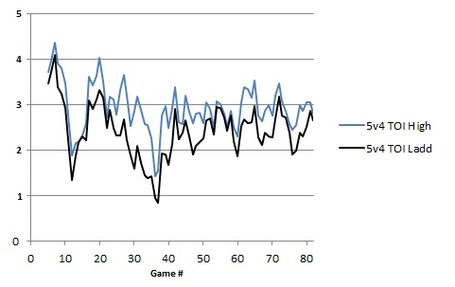 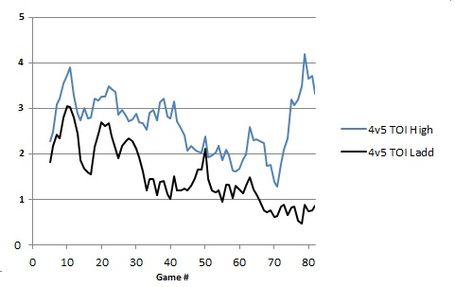 Those are definitely some important minutes. One thing I'd like to call attention to was the late season spike in 4v5 time, and that Ladd's minutes did not follow the spike. At that point in the season, Ladd's Little Wheeler was getting increased 5v5 minutes and I think the rationale was why burn our top 5v5 line in shorthanded situations when we can dump those minutes on the stellar defence of GST. Hey, I didn't say the rationale made sense... 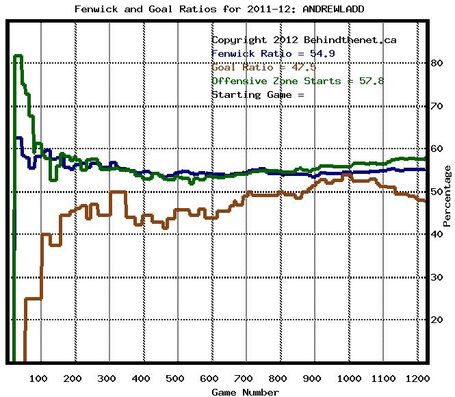 Turns out that, despite the plus hockey Ladd's Little Wheeler was playing, Ladd's PDO suffered a bit thanks to fairly low on-ice shooting (7.55%, lowest of our top 6 forwards) and the fact that Ondrej Pavelec and Chris Mason turned up the suck to 11 when LLW was on the ice (89.9% save percentage at 5v5? yuck).

To be fair, though LLW handled the second toughest competition behind GST they still received pretty favorable zone starts, which helped bump their shot stats a bit. Assuming then that they received average top 6 minutes, I'd say 28 goals out of Ladd is pretty nice, as is the solidly positive shot ratio. At the same time, it's not elite performance out of that situation, which is certainly possible since it's a common usage among top-liners.

After mulling over what I'd hope a $4.4m forward would do for us, I can appreciate the fact that he was a solid player at evens and on the kill (though marginal on the powerplay), and I think he gets pretty darn close to matching what we should be getting for the money. Keep in mind, though, that that wouldn't put a player in "A" territory for me. On the bright side, if he can repeat this kind of contribution near the end of his contract, we will definitely getting more than what we paid for.