And now, the big one. It was a meandering journey these many months, through the Fido Purpurs, Gord Kannegiessers, Espen Knutsens, and Cleon Daskalakis's of the league's history, but we're finally here. As you might have gathered, Peanuts O'Flaherty was victorious in his semifinal showdown with Fred Sasakamoose, and now faces off with the true Cinderella, Zarley Zalapski. You probably all know by now, but double Z's was omitted from the 1980s name list, but by popular request his candidacy was renewed for the 1990s, which he won quite convincingly. Can he complete one final upset, or is the undeniable intrigue of Peanuts O'Flaherty just that: undeniable?

Follow after the jump for the final bracket and the purpose of the vote. 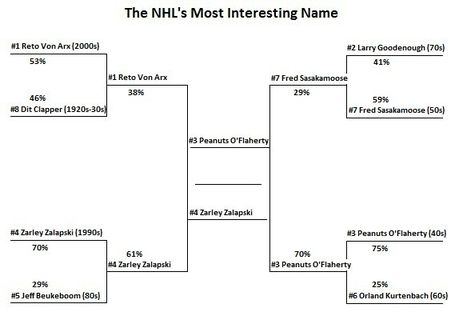