Admittedly, there isn't a method to my madness here; I'm basically just looking at forwards first, and focusing on those that played most of the year first. Beyond that, it's catch-as-catch-can, though you can be sure I'll get around to some of the higher TOI guys soon. That being said, it's just as interesting to look at role players like Jim Slater and see just how consistently Noel actually used him in particular roles. Without further ado, A.C. Slater.

There was really no doubt that Slater was leaned on this year to take tough minutes; as we'll see later, his zone start percentage was very low, he took on the most shorthanded minutes on the team, and being teamed up with Tanner Glass and Chris Thorburn ensured that he wasn't going to be setting up any snipers. He still mustered 118 shots and 13 goals, which is admirable, but at 29 years old and UFA status looming, I suspect the team might be content to try the younger option in Patrice Cormier, who is just as capable as Slater at the faceoff dot. To the TOI figures... 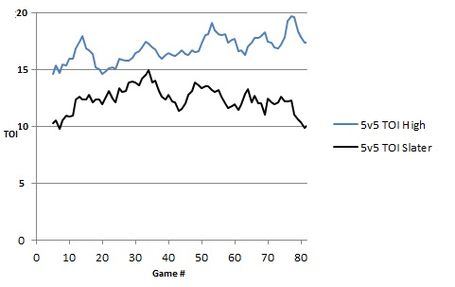 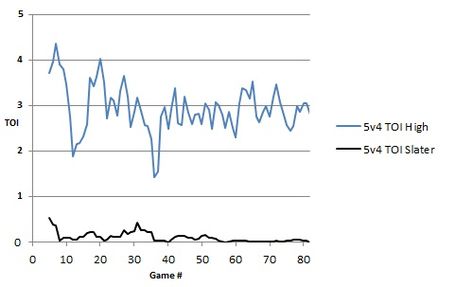 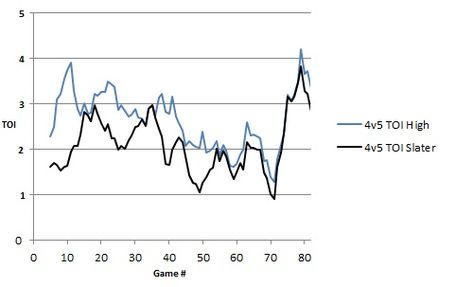 Clearly, Slater was one of our top penalty killers (winning faceoffs at 54.4% clip helps), and though he didn't see elevated minutes in the latter months of the season, he seemed to still get steady minutes. Now, in terms of what he did with those minutes... 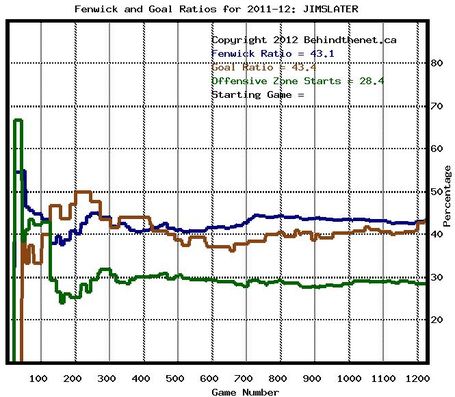 That blue line below 50 means he and his teammates were getting outshot when he was on the ice, but to his defence he had the 5th lowest zone start percentage among forwards playing 20+ games (at 28.5%). All those guys with lower zone starts had similarly atrocious Fenwick percentages, because they were all getting shitty minutes. Now, before I get too rosy with Slater, it's important to point out that a whole slew of guys with slightly better zone starts posted much better numbers, and in some cases against tougher competition. Examples include Brian Boyle, Samuel Pahlsson, Dave Bolland, and Paul Gaustad...so we know that it was conceivable to play passable hockey in that situation.

There's something to be said for the fact that he wins faceoffs, but if he was a distinctively good defensive player he'd be able to do a little more in those 5v5 minutes.

A $1 million cap hit isn't breaking the bank for the guy, but it's 150K more than Cormier and (gulp!) 300K more than Kyle Wellwood. And he wasn't even that good on the penalty kill. Seriously, the only reason I'm putting the plus on there is because I appreciate a good faceoff guy - most stats guys would rightly point out that I'm giving him too much credit for it.