Visiting the Enemy (Phoenix, not the Florida Panthers)

Share All sharing options for: Visiting the Enemy (Phoenix, not the Florida Panthers)

My friend Steve lives in Dallas and has been suggesting a hockey road trip for months (years, really). I've seen more than enough games in LA, San Jose, Vancouver and Calgary, so we debated where else we could go. For a number of reasons (unlikely weather delays, distance, availability of tickets, quality of opponent), Phoenix beat out Denver and St. Louis.

We ended up with some pretty dope seats, row O on the blue line: 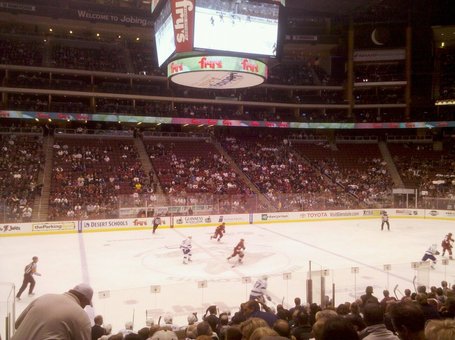 That's probably my favorite spot to watch a game from - when you're on the glass, you can see players better, but not when the puck is along the boards. We could see that Steve Downie was whining all game; we just couldn't tell what he was whining about.

All-in-all, it was a quality game. I like watching the Lightning, though they were exhausted after playing in Dallas the night before (Steve is so hard-core, he went to that game too.) The most noticeable player on the ice on either team was, by far, Martin St. Louis. There's no player in the league who can't push him off the puck, but when he has it, he does ridiculous things - he fed Stamkos a pass in front of the net that so baffled the Phoenix defense, Stamkos had about four seconds to put the puck in a wide-open net. St. Louis was also noticeably not a defenseman - he got completely worked by Lauri Korpikoski for a short-handed goal.

I was also intrigued to see first-hand the off-ice state of the Phoenix franchise. They didn't bother to announce the crowd of 12,714, and, as you can see, there's some serious ticket mispricing...The upper deck was packed and you could have bought tickets for a family of elephants in the lower bowl at game time: 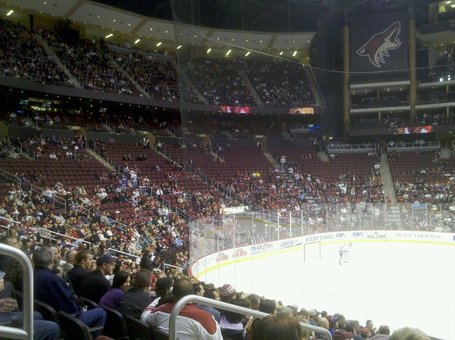 I don't think hockey is destined to fail in Phoenix by any stretch of the imagination. But it is certainly destined to fail in Glendale. As you drive the 20-odd miles from Phoenix airport across a landscape with zero blades of grass, it's clear that the entire Westgate City Center (where the Coyotes and Cardinals play) came out of some crackpot land development scheme that's the modern equivalent of swampland in Florida.

The Westgate City Center is just another example of the worst in American planning. It's a mix of Irvine malls and Las Vegas - a place that people drive to so that they can walk around. But the anchor tenants are decidedly third tier: the biggest hotel is the Marriott Renaissance, and the main street wasn't cool enough to merit a Hard Rock Cafe; instead, it got a Margaritaville. Anyways, the entire operation is in foreclosure, and as far as we could tell, the Coyotes operation is so hard up for cash that they only open the doors to the arena an hour before the game to save on salaries. Of course, there's enough money to make everyone go through metal detectors to get into the rink. I don't think any of the other 29 arenas do that, but I guess a lot of hockey fans are packing in Arizona.

Anyways, to the eyes of an outsider, it seems like this team probably could have done ok with a rink in Scottsdale or even in downtown Phoenix amid a more organic setting, but I don't think that's the way things work in Arizona. Actually, I should say "worked"; I can imagine the 2000-era optimism for building massive retail/sports projects is completely gone.