The Lightning have so far exceeded expectations in the 2011 playoffs. Their goal differential was a mere +7 during the regular season, so one might have expected an early post-season exit. On the contrary, they put the Penguins and Capitals away without the benefit of home ice advantage, including a sweep of the conference-leading Caps. Has this playoff performance been heavily influenced by luck? Let's look at how they scored their goals.

Previously I did a regular season league-wide analysis of how goals were scored and put them into categories. Goals were categorized as "observed skill" if they were scored from a single player's effort, one timers, or stick deflections. On the other hand, "observed luck" were immediate rebound goals, accidental deflections, blind whacking/jamming, goalie or defensemen own goals, weird bounces, and empty netters. To be safe, I put any ambiguous goals in an "undetermined" category. I admitted that it is not a definitive approach and you may not agree with all these categories, but this analysis was still well-accepted and no major criticisms were raised. So, I thought that I'd apply this method to Tampa's playoff run.

I watched Tampa's 38 goals so far in the 2011 playoffs and used the same categories. Their first 3 games against the Penguins were heavily luck-driven, but over the course of the rest of the games it really balanced out. Here is the result: 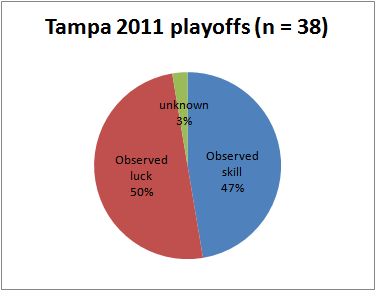 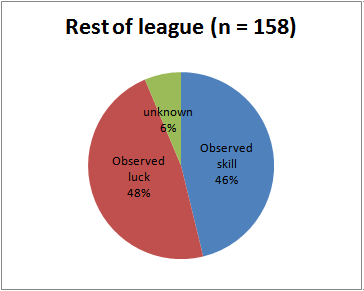 Tampa so far has scored their goals off skill at the same rate as the rest of the league. This suggests that they did not simply get some lucky bounces to advance through 2 rounds of the playoffs. Is Tampa the real deal? Can they handle Boston? Answering these questions would obviously need a deeper look into statistics like Corsi and zone posession, their current injury status, as well as an unbiased eye watching their games.