Share All sharing options for: Getting Defensive: New Jersey Devils

"Getting Defensive" is a weekly look at the defense corps of the 30 NHL teams using the Time On-Ice (TOI) data from the 2010-11 regular season.  For a general introduction to the inspiration and methodology, please see this post and this post.

The previous two weeks, I've looked at NHL teams (the Atlanta Thrashers and Toronto Maple Leafs) that had relatively stable seasons on the blue line.  How could I possibly say "relatively stable"?  Because now you're going to see what it looks like when the fudge hits the fan.

The New Jersey Devils entered the season with what appeared to be three known commodities: solid-if-unspectacular goaltending, a potent set of forward lines, and a defensive corps that didn't really scare anybody on paper.  That being said, the defense was expected to at least uphold the grand New Jersey "trap" tradition, and help Martin Brodeur add to his video game numbers.

Instead, Brodeur had a rough start to the season, made worse by the loss of Zach Parise (who is truly an incredible, two-way talent) and Ilya Kovalchuk's Failure to Launch.  The defense actually wasn't desperately bad overall (27.4 SA/G pre-All-Star Break), but the former three problems were sufficient to dig a very deep hole the team spent the remainder of the season climbing out.  And did they...after the All-Star Break (having axed head coach John MacLean for Jacques Lemaire about a month earlier), they saved Brodeur the trouble of Brodeur-like play (though he did rebound) by allowing a miniscule 24.5 SA/G, the best in the league by about 3 SA/G.  They roared back to playoff contention in the late winter, though unfortunately they couldn't quite pull it out in the end.

Throughout these stop and starts, on defense the Devils were simply trying to put together something that worked from myriad parts and cranky injuries.  In the process, they found that Matthew Corrente wasn't going to help the cause, that Andy Greene probably isn't an every-minute guy, and uncovered a few players that could form the backbone of the future (Mark Fraser, Matt Taormina, Mark Fayne).  They also found that one big investment (Anton Volchenkov) was possibly not worth it, and another one (Henrik Tallinder) was, so far.  What does that look like in our GD (Getting Defensive) charts? 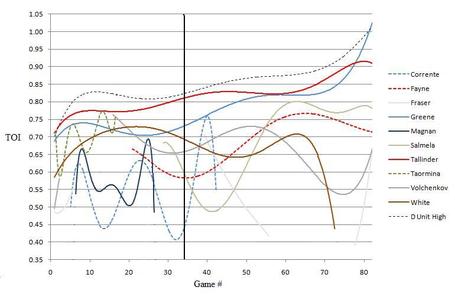 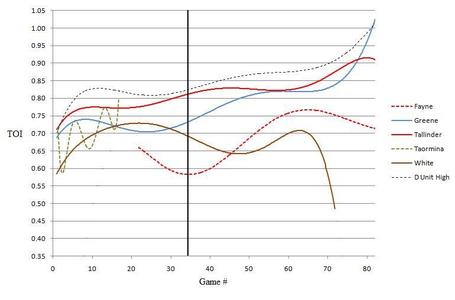 Losing Taormina hurt a bit, as he was playing his way into regular time on a team that needed an offensive-type defensemen to emerge.  Fayne essentially stepped into that role later in the season, though it remains to be seen if he'll continue to develop into those kinds of minutes down the road.  Colin White's late-season dip was as much due to injury and being shut down for the remainder of the season as anything; that said, he might be nearing the twilight of his career. 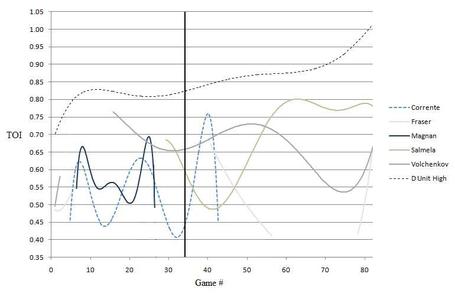 Sorry about the pastels.  Corrente seemed to be filler as much as anything, and he didn't play particularly well, so no surprise there.  Ditto Magnan.  Salmela was pretty bad, so the uptick in minutes doesn't make a ton of sense.  Volchenkov was average at even-strength, but as we'll see later (and the numbers suggest) he seemed to be seen as a solid shorthanded player. 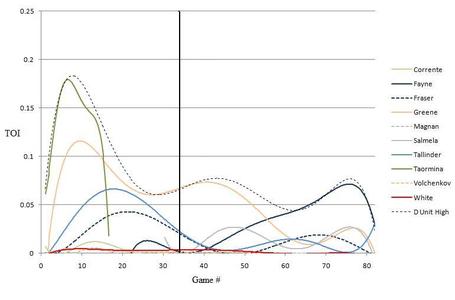 Perhaps to add to the frustration of not winning was that it wasn't for lack of powerplay time. 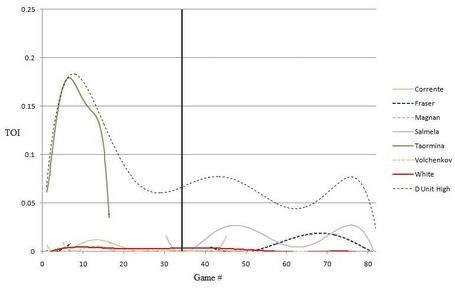 Yup, losing Taormina wasn't helpful; he was doing some pretty damn good things with his powerplay time, albeit a small sample (11.9 Corsi Rel).  Not much to see here, though it's worth noting that Salmela, who of all things would be considered an offensive defenseman, was apparently not impressive enough to give him minutes over a rookie like Mark Fayne. 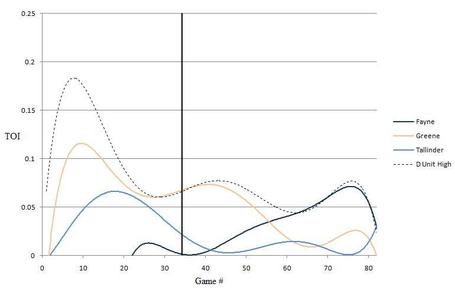 Fayne explosion, and a decline for both Tallinder and Greene.  To be fair, the Devils weren't keen on using more than one of their defenders on the powerplay.  It does suggest, though, that Andy Greene is not the answer. 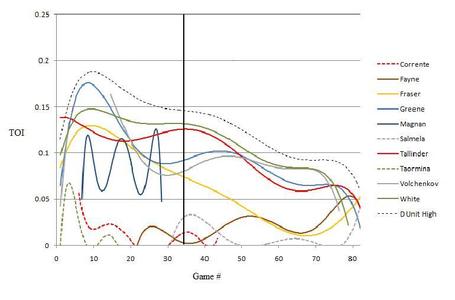 The Swedish Chef would be proud.  Worth noting is that the shorthanded minutes went down as the season progressed (Lemaire?), always a good trend. 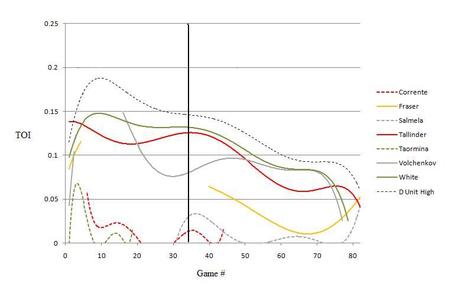 There's actually a lot of consistency here.  Even Volchenkov's slight dip (possibly due to getting dinged up) stabilized to steady minutes by the second half. 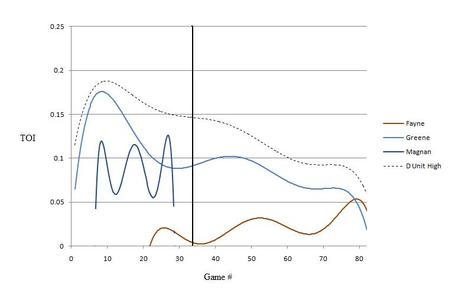 As I mentioned before, Greene seemed to take second fiddle all over the place after starting the year as the every-minutes defensemen.  Magnan's brief stint helped offset the loss of Volchenkov, as he wasn't impressive at even-strength but actually played quite well shorthanded (8.1 Corsi Rel, despite tough competition and poor teammates).  Fayne slowly creeped up a bit as the year progressed, possibly moving into the role that was initially given to Greene.

That one was tiring.

P.S.  Be sure to check out John Fischer's impressive series of articles on the Devils' defenders, seen here, here, and here.  Really good stuff.