Share All sharing options for: Skating Patterns for Duncan Keith and Nicklas Lidstrom

"Something is rotten in the state of Denmark." - Last Action Hero

As a brief aside, I know that the above quote is from Hamlet. But the linked video above is both hilarious and relevant in that it could be construed as an attack on one of the greatest and most elegant pieces of literature ever, much like my post today could be construed as an attack on the normally empirical and intelligent nature of Behind the Net. I'm mostly kidding(I hope), but bear with me on this one and we'll be in good shape.  Today's experiment is analyzing skating patterns. Specifically, the skating patterns of Nicklas Lidstrom and Duncan Keith from the Detroit-Phoenix and Chicago-Toronto games on March 3rd. 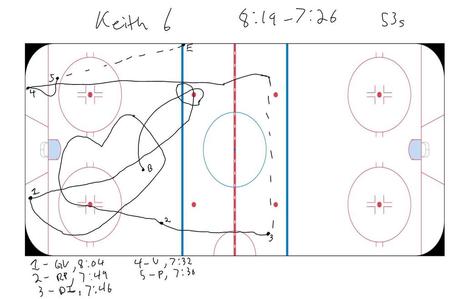 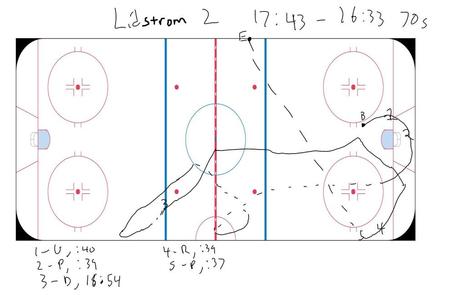 What you see in these images are two charts of skating patterns. If the names not been at the top in semi-readable handwriting and you were given a choice between which one of these charts, at face, is Nick Lidstrom and which one is Duncan Keith, chances are that your perception of them would be exactly what they are. Lidstrom is known as one of the most efficient skaters in the NHL and for having an almost eerie sense of positioning. Keith is the young dynamo who is probably my pick for the best all around skater in the NHL. Both of these shifts are about a minute long and they convey the different methods two Norris Trophy winners use in their craft. If you are wondering what these charts say, here's a helpful guide:

So, to the analysis. You see that on this shift especially, Lidstrom earns his reputation for economy. He doesn't move much at all, and if I could track how many times he strides per shift, I would bet it would be very low. His average shift length in this period is a lot longer than Keith's. Compare him to Keith's chart where Keith is all over both sides of the ice, frequently beating the forecheckers back on a dump-in. The 1 on his chart where he gives it away was the result of a hard forecheck by Toronto and him not having much time at all with the puck. I'd like to think that Lidstrom wouldn't be able to hustle back as fast as Keith can to gain possession of the puck and give his team a chance at a counter attack, but it never seemed like Lidstrom had to. Two more: 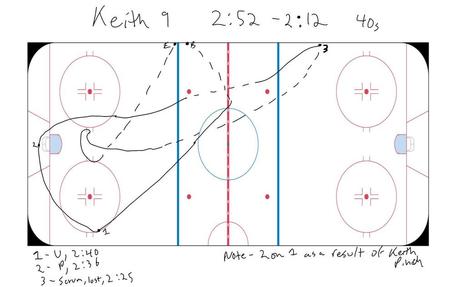 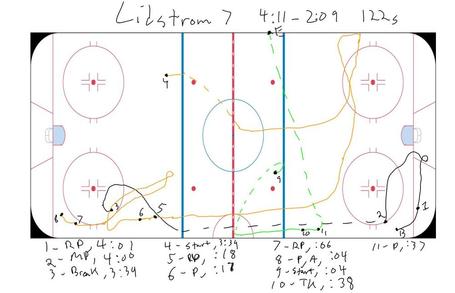 On Duncan Keith's ninth shift, he does more of the same roaming, beating a forechecker to pick up the pick at 1, then making a reverse pass, 2, to his partner NIck Leddy, and then joining the rush to try and keep the puck in at 3. Unfortunately, he got kind of crushed by Mike Brown trying to advance the play and the result was an odd man rush the other way. Luckily for the Hawks it didn't result in anything but he seemed pretty shaken up and was late getting back to his zone.

Lidstrom, however, took a good solid two minute shift. The type of shift Mike Keenan got so upset at Alex Kovalev for taking that he repeatedly did not let Kovalev come off the ice for an entire period. Only Nick Lidstrom is no Alex Kovalev, and part of this was a power play. Still, I love that story. Anyways, Nick Lidstrom started out in his defensive zone, receiving a pass at 1, missing a breakout pass at 2, but the Red Wings gained possession anyway and got a power play. Starting off at 4 and working on the power play, you'll see that he stayed on his side, playing catch a little at 5 and 6, but then shifting down to the low side wall at 7 and receiving a pass, protecting the puck for a second, and then making a pass from 8 into the slot. I'll note that this was a goal by Johan Franzen. Fantastic. Now, not content to get off the ice, as it's only been a minute, he stayed on from 9, moved up and closed off the gap on a Coyotes forward trying to enter the zone and took the puck away and made a breakout pass. Happy with his reputation sealed as a two-way defenseman by getting an assist and a takeaway on the same two minute shift, he glided over to the bench.

So, like I said before, I'm not sure what to make of these charts. I think they contain less data than the pass charts I did lass week and are of less utility, but I still think it's an interesting exercise to do and it provides some pretty pictures. I don't think this is going to be a valid way to track events, so I think I'll probably stick with tracking the puck more. But, for kicks, here are the charts for the first period of both games, in two handy images (Keith's last shift is missing for size reasons). 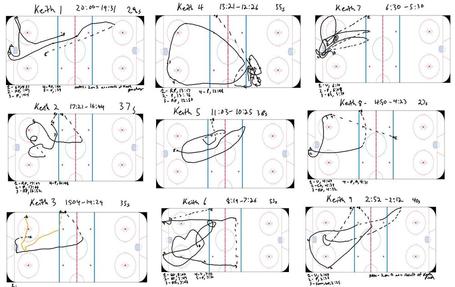 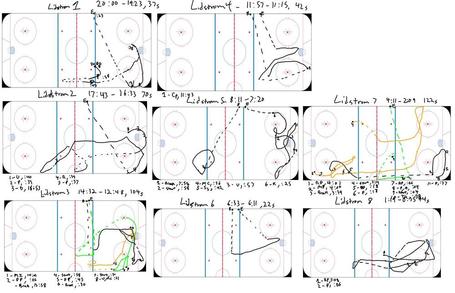 As always, let me know what you think. All feedback is very much appreciated. If I was going to do this particular chart again, I was thinking about looking at Ovechkin's skating patterns from last year to this year- with Boudreau's new defensive system, is he staying further back at the expense of cherry picking?