How the Jets are being used

Share All sharing options for: How the Jets are being used

Let's take a quick look at the OZQoC charts for the Winnipeg Jets, which tells us at a glance how their players are being used.

On the x-axis is the Offensive Zone starts in reverse order, so those on the right are starting mostly in the defensive zone.  The y-axis has the Quality of Competition, so those at the top are being matched up against their opponent's top lines.

First let's look at the forwards.  The close a player is the top right, the tougher their jobs have been, and the sheltered players in whom the coaches have the least confidence are tucked in the lower left. 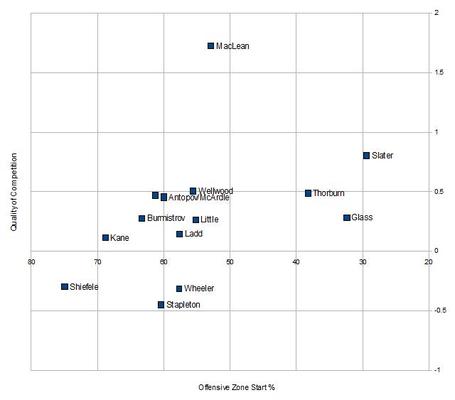 If you ignore Brett MacLean (small sample size), coach Noel has given Jim Slater the toughest job, starting in the offensive zone under 30% of the time - about as low as it gets, and against top opposition - usually with Chris Thorburn and Tanner Glass (one of whom is dealing with the tough ice-time far better than the other!).

Blake Wheeler, Tim Stapleton and 18-year-old rookie Mark Scheifele have fortunately only had to line up against third and fourth lines, and generally in the offensive zone, but they only have 1 even-strength goal between them to show for it.

Everyone else seems to be thrown into a pile and rotated roughly equally competition-wise, but their leading goal scorer Evander Kane is enjoying far more time in the offensive zone than Kyle Wellwood or Bryan Little.

Let's look at the defensemen. 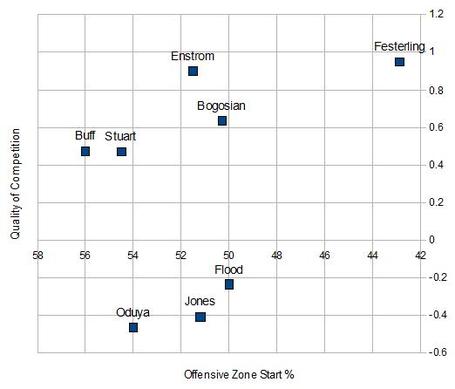 If you once again ignore Brett Festerling's small sample size, you don't see the same skew among forwards (zone starts between 30% and 70%) among the defensemen, all of whom are in a tight band from 50% to 56%.

The distinguishing factor is therefore in the Quality of the Competition.  Tobias Enstrom is facing the top opponents, and 2nd to Alexander Burmistrov in +/-.   After that, Zach Bogosian is getting a slightly tougher job than Mark Stuart and Dustin Byfuglien, who is 2nd last to Chris Thorburn at -6.  The others (Mark Flood, Randy Jones and Johnny Oduya) are being slightly protected by Coach Noel.

As we approach the one-quarter mark of the season that's how the players are being used.  Keep that in mind to place all other analysis in proper context.