It should come as no surprise where passes originate in soccer. From the chart below, you can see the following:

1) Goal kicks, throw-ins and corner kicks make up a significant percentage of all passes.

2) Because approximately 70% of all passes are played forward, there are fewer passes made in the other team's ends than in a team's own end.

3) It is very rare for a team to pass the ball inside the other team's 18-yard box, or from their own corners. 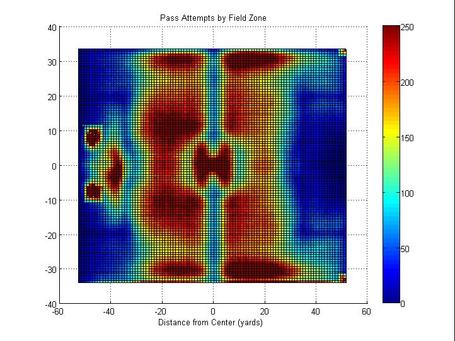 Pass completion rate looks a little different. Between the 18-yard boxes, teams generally complete passes at an 80% range or better: 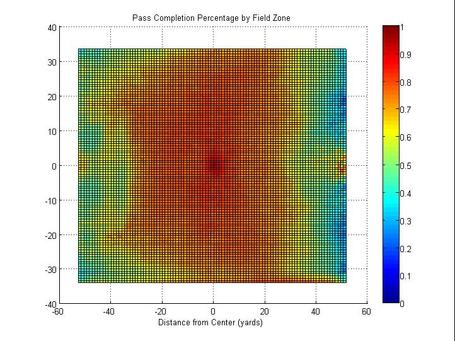 Again, this makes sense - there is little incentive to heavily a defend a pass that's well outside either your opponent's or your own shooting area. But once play approaches the box, teams will have more players on the ball, leading to lower completion rate. This process of moving the ball forward is captured by plot of pass target locations, which is essentially the mirror image of the pass attempts chart: 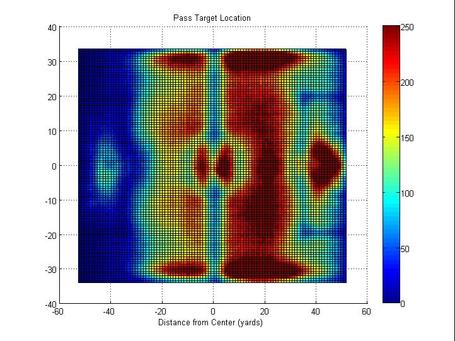 This is probably the most instructive chart - teams attempting to play the ball to a location in their own half or along the sidelines can do so virtually unfettered. But as soon as they attempt to get within 40-45 yards of their opponent's goal, the defense comes into play. Teams have almost no chance to complete a pass inside the 18-yard box. 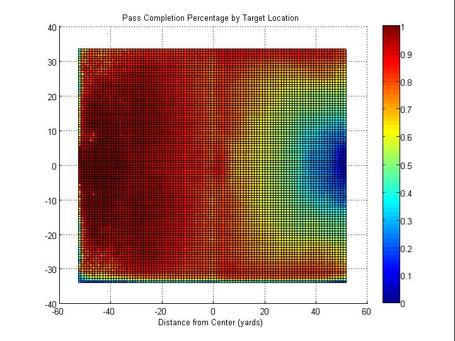 Total passes in and of themselves do not predict a team's likelihood of winning. But a team that is able to pass into more dangerous - and lower percentage pass - areas is more likely to get opportunities to win.