A Tale of Two Talents: One True and One Not

Share All sharing options for: A Tale of Two Talents: One True and One Not

Some of you may have seen this plot last week in my look at the persistence of shooting percentage.  I looked at whether some players exhibited an ability to score more often from a given spot on the ice than other players.  This "talent" regressed 75% to the mean, and a high level of skill was really only identifiable in Ilya Kovalchuk and Alex Tanguay: 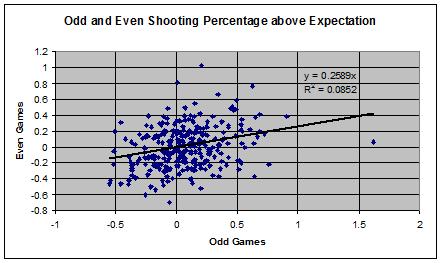 Compare that to a "legitimate" talent - getting to a good spot on the ice and taking a shot from there.  A player's ability to get to his shooting locations regresses just 11% to the mean - in other words, a player controls where he gets opportunities from, and it is an inherent part of his play, unchanged from game-to-game: 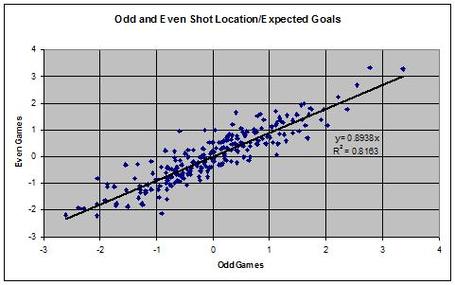 Note that I have captured shot location not as distance from the net, but as expected shooting percentage for an average shooter based on shot distance and angle.

So which forwards put themselves into the best and worst average shooting locations - initial shots at even-strength only, no rebounds:

And my favorite comparison - how often can you do a sports experiment with identical twins?

Daniel Sedin produces a ridiculously high shot volume compared to his brother, and suffers only minimally in terms of where he takes his shots.

- Transient ability in getting to that location = 3%

I think I have this right - and it strikes me as somewhat of an unintuitive result.  We know that a lot of what appears to be shooting ability is transient - see Henrik Sedin's 4/54 streak to finish the season if you don't believe me.  But the way a forward plays - the spots he gets to to take his shots - is barely more important to his shooting percentage than his shooting ability even though it is very consistent even over the course of five seasons.  So Tomas Holmstrom's ability to get position in front of the goal isn't much different from Ilya Kovalchuk's ability to pick the top corner.  (Of course, we've only considered initial shots here, so Holmstrom's rebound ability is uncaptured.)  The bottom line is that a player doesn't even control 50% of his shooting percentage in the long-term.