Share All sharing options for: Cammalleri vs Malkin shooting

I wanted to look at Mike Cammalleri and Evgeni Malkin's shooting performance over the last five years relative to expected shooting based purely on shot location.  These are only even-strength initial shots since I think we want to know how they do at picking a corner while being defended:

Cammalleri has exceeded expectations very slightly, while Malkin underperformed very slightly.  If this is a true talent, we'd expect to see the same pattern in their even-numbered and odd-numbered shots.  Looking at 999 shots for Cammalleri and 824 for Malkin:

It's hard to draw any conclusions there. If we look at the amount by which all players with 500+ shots since the lockout exceeded expectations in odd and even games, we see that there's not much of a relationship.  This "talent" regresses 71% to the mean: 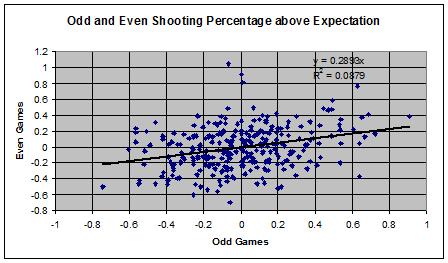 Only six forwards were able to exceed their expected shooting percentage by 1.5 standard deviations in both even and odd shots: Ilya Kovalchuk, Daniel Alfredsson, Alexander Semin, Marian Gaborik, Jason Spezza and Nathan Horton.  I think Kovalchuk, and to a lesser extent, Horton, are the only players who show up in this list no matter how many different ways I put it together.  So if you ever want to credit a player with better shooting talent than anyone else, those are the only two guys who I'd have any confidence in.  Otherwise, a shooter is basically a shooter...