Share All sharing options for: More on Score Effects and Corsi Numbers

Earlier, I wrote about the effect that the score has on shot counts.  In a nutshell,when a team is down, it tends to outshoot its opponents.  This effect is not constant throughout the game - there's very little difference in shot counts for the first two periods, but in the 3rd period, shot ratios are very extreme: 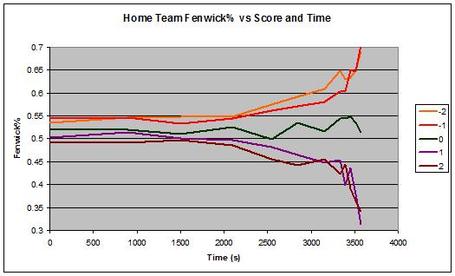 So what happens if we adjust shot totals for home/road, score and time?  Surprisingly, not much - the standard deviation of the score effect adjustment is 0.45%.  Over the last five years, the 2008-09 Boston Bruins had the largest expected increase in shot ratio, and that was barely 1%:

At the other end, the adjustments are slightly more extreme - not surprisingly, because it's easier to put together a legendarily bad team than it is to build a comparably good one:

Again, this year's Toronto Maple Leafs disaster makes an appearance - bad goaltending and a strange unwillingness to play to the score when they were winning makes them the rare truly bad team that legitimately outshot their opponents.

Overall, I think we don't have to worry too much about score effects at the team/season level - even the best and worst teams over the last five seasons are unlikely to need more than a 1% adjustment.  Of course, score effects are incredibly significant at the game level and can not be ignored over a small number of shots.