Share All sharing options for: Goaltender Performance vs Salary, 2005-09

We've discussed the notion of goaltender talent numerous times here.  Suffice to say, while it's not non-existent, it's much less significant than people tend to believe.  But whether it exists or not, NHL teams have a hard time evaluating it and determining what to pay for it.  The trend for goaltender performance is just slightly upwards with salary: 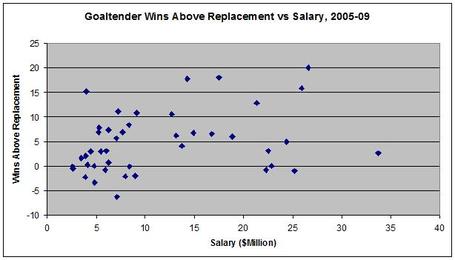 The key place to look is above $10M - these are free agent goalies signed to long-term contracts - and their long-term performance is terrible.  I've made the situation look better than it is because I've only included goalies who actually played during a given season, so Rick DiPietro's zero of a contract doesn't pull down the averages.  That dot out at $35M for virtually zero production?  Nikolai Khabibulin.

Again, the story's no better if we look at four-year save percentages: 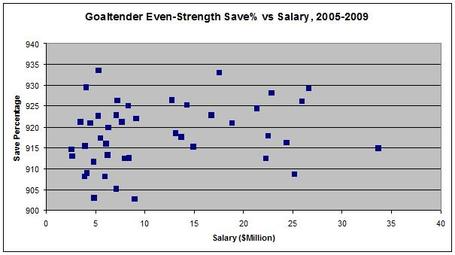 The problem is that goaltender performance is very luck-driven.  A guy who posts a good save percentage over a season and a half will very likely find himself with a huge contract.  But 90-100 games is barely long enough to evaluate a player's ability, and teams can very easily find themselves with someone who's nowhere near as good as they thought.  Of course, with so many millions on the line, the goalie has to play anyways.

In a nutshell: there is very little talent variation among starting goaltenders; only a small number of goaltenders (Vokoun, Luongo) have long-term ability that's worth paying big money for; and most big goalie contracts don't produce much value relative to picking guys up off the scrap heap.