Share All sharing options for: A Brief Look at Fighting & NHL Attendance

I had grand plans for this study, where I would juxtapose teams with "Ice Girls" versus those without, and attendance figures both pre- and post-"Ice Girl", in addition to these numbers on fighting, just for a little glimpse on possible draws outside of the hockey itself.  Unfortunately, if you can believe it, it's hard to find a reliable history on "first years" for the Ice Girls on each respective team.  I was pretty sceptical that they would make a major impact on attendance anyway.

Cutting my losses (not a complete loss, I got to browse Ice Girl sites), I decided just to do a basic study taking the attendance figures from ESPN (which date back to 2000-01) and put them alongside team fighting ranks and team points ranks to see if either bore fruit.  I'd always felt that fighting would stick around as much for its attendance draw as anything else; now I'm not so sure.

This is simply comparing ranks, 1 through 30, though I might pick around the data at a later date to look at changes in attendance and changes in some of these other variables from one year to the next.  As it stands, what we're looking at below is I'm holding the first rank static across the period, and looking at how the second rank might fluctuate or remain the same over that same period.  For instance, starting at the left on the horizontal axis, I'm looking at the varying attendance ranks for the teams that finished 1st in number of fights, then 2nd in fights, then 3rd, and so on.

That being said, the visuals from 9 years of data: 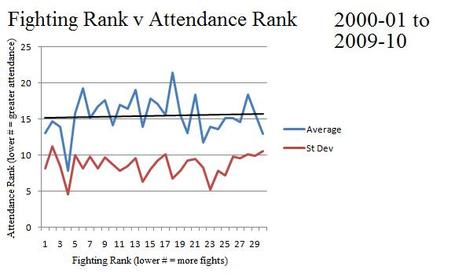 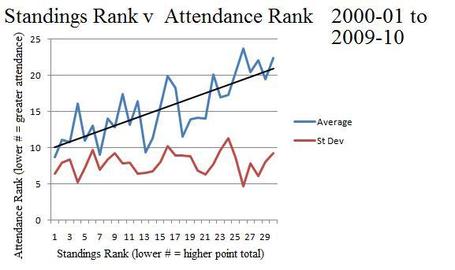 Just for kicks, and since I had the data, I decided to put together this last one too. 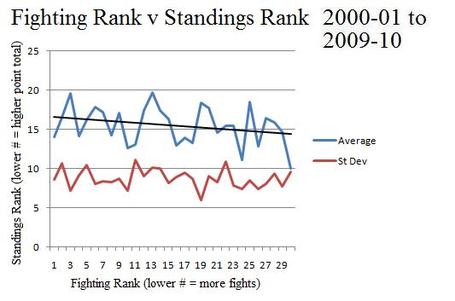 So, just on the surface level, fighting doesn't seem to have a major impact in either a positive or negative fashion for attendance (though I think the jury's still out on standings).  It doesn't rule out that a Charlestown Chiefs-like development wouldn't draw some crowds, but I'd have my doubts that it would sustain higher attendance levels in the long run.

It would also be fair to say that team performance very likely matters more than fighting when it comes to attendance.  The only bizarre quirk in these data is the downward spike on the top graph, where for whatever reason coming in 4th in the league in fights just so happened to also be the spot where successful teams were positioned.

I'm putzing around with similar data from a few of the minor leagues, so I'll have a couple more posts of this ilk in the next week or so.

Thanks to ESPN for the home attendance numbers and hockeyfights.com for the data on donnybrooks.