Share All sharing options for: EPL: Persistence of Possession

In our NHL analysis, we spend a lot of time looking at shot ratios (Corsi, Fenwick, etc...) as a proxy for puck possession or offensive zone time. These are fairly consistent quantities from year-to-year, and teams retain nearly 60% of their performance: 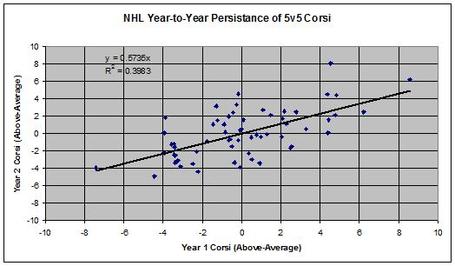 Compare that to ball possession in soccer: 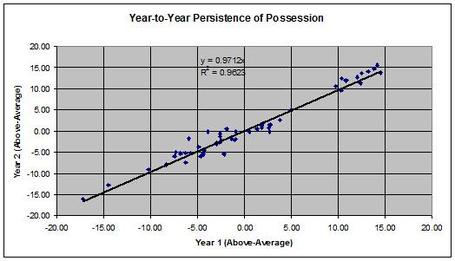 EPL teams have virtually zero year-to-year variation in ball possession. If you know how a team did last year, then you've got a pretty good idea of how they'll do next year. There are other elements - goaltender talent, shooting talent, and a whole lot of luck - but teams are essentially stuck where they are. Here are teams that been in the EPL over the last four seasons:

Obviously there are structural reasons why Chelsea, Man United, Arsenal and Liverpool dominate play, but most teams are trapped in a very small range of performance regardless of year-to-year changes they make to their teams. It's unfortunate that we don't have passing and possession data for the NHL - we could see if this is an equivalently-persistent skill in hockey. It seems unlikely, but having pass information as opposed to just shots as we do today would leave us much less at the mercy of luck.