Share All sharing options for: What's the matter with Madison Square Garden?

You don't normally think of "rink effects" like "park effects" in baseball.  Sure, there were the smaller ice surfaces at the old Boston Garden (191x83), or the Buffalo Auditorium (194x84), or the tight corners at Maple Leaf Gardens, all of which may or may not have benefited the home teams.  But all of those rinks are gone today, replaced by ice sheets that meet the NHL's standard dimensions: 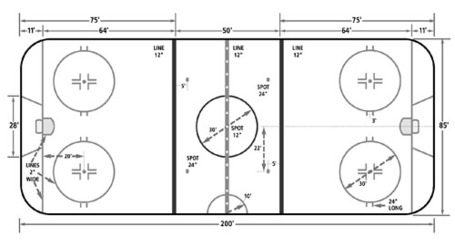 But when we look at the data recorded in each NHL rink, we do find "rink effects" - the bias of those watching the game and recording the stats for us.  For several seasons, Madison Square Garden has had the shortest shot distance in the NHL (see Alan Ryder's "Product Recall for Shot Quality" for more details.)  This is not by chance; there are systematic errors in recording shot location (both for and against) at MSG.

I watched about 30 goals to see if I could figure out what was going wrong (I would have watched more, but apparently the NHL's video server crashes if you watch too many goals.)  I found a great example in the first game at MSG last season.  You can see Nikolai Zherdev (circled in red) about to release the puck in the slot above the face-off circle.  The top of the face-off circle is 35 feet from the goal line, and that's probably how far out Zherdev is when he shoots.  He's a bit to right of the net - perhaps as far as seven feet, which is where the edge of the face-off circle runs.  So let's call his shot coordinates (35, 7), or about 36 feet from the net. 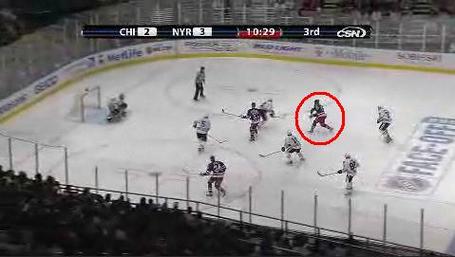 How was his goal recorded in the official play-by-play?

As I watched another few games, it was clear that the errors are not consistent.  But there's at least one goal every game where the officially-recorded location is nowhere near the real location.  For example, Zherdev had another goal on October 25th where he clearly shot the puck from beyond the face-off dot; it was recorded as 18 feet from the net.

Or Dan Girardi's goal on October 30 against Atlanta.  Girardi is almost at the boards, and he's several feet behind the face-off dot.  He might be 30 feet from the goal line - but the recorded distance from the goal line at MSG is just 14 feet, which would be where I've put the X - a circus shot given that he was just a few feet away from the boards. 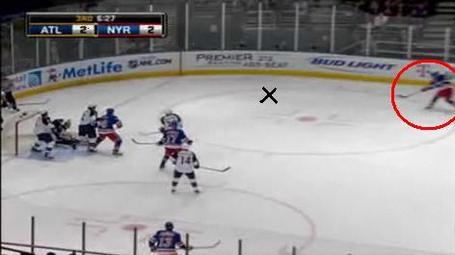 The more you watch, the more wild mistakes you'll find.  No doubt there are errors at every rink - but MSG makes the worst of them.  As long as you remember that the coordinates of the face-off dots are (20,22) - that is, 20 feet from the goal line and 22 feet from the center of the net - it's hard to make egregious mistakes like we've seen here.