What is Glenn Healy talking about?

Share All sharing options for: What is Glenn Healy talking about?

I rarely watch the Hockey Night in Canada intermission panels, but I was too lazy to change the channel during the Flames-Sharks game on Saturday. What drew Glenn Healy's ire? The Flames didn't use Jarome Iginla in their last shootout. Healy reminded us that Iginla was the "hottest" NHL player in the month of November. Iginla did indeed shoot 27.6% over 14 games, and presumably Healy believes this indicates Iginla's shooting ability has gone way over his career figure of 13.4%. Like the old NBA Jam arcade game, Iginla's temporarily "on fire" and Calgary can't afford to let this ephemeral talent of his slip away.

Let's take the longer view: Iginla is 7-for-25 on shootouts in his career. (The other shooter Healy suggested was indispensable was Stephen Weiss, who's 3-for-18 in his career.) Assuming he saw a set of goaltenders who were, on the whole, league-average, here is the distribution of Iginla's true talent in the shootout: 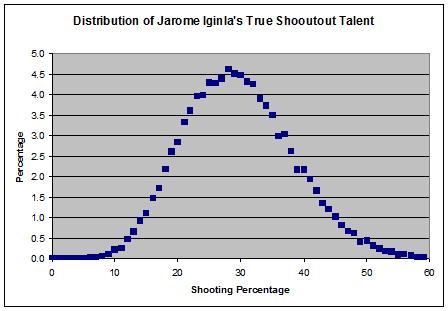 So is that a guy who absolutely has to be one of your top three shooters? No chance. Is it likely that Flames coach Brent Sutter picked his shooters based on how successful they were in hundreds of shootouts in practice? Very. Are we better off trusting lots of reps than looking at last month's shooting percentage? I think you know the answer.